It's beyond obvious that the Democrats and the corrupt MSM helped by the Deep State are desperately tryna steal the US Election. Clearly the numbers don't add up. And there are so many reports of ultra-suss behaviour being shared across social media it's jaw-dropping.

The anti-Trump forces are clearly applying that maxim often attributed to Stalin: "Those who vote decide nothing. Those who count the vote decide everything."

And Twitter is straight up telling people not to believe their lying eyes!

FFS, framing POTUS's tweet in this way is like saying "it's cheating to tell people to stop cheating".

And of course they haven't been censoring his opponents, who've been unequivocally claiming that he will or is tryna steal the election himself. Remember how Hillary said that Biden should not concede defeat under any circumstances?

Still, it's not surprising that Hillary and her ilk would lie so shamelessly. What I find disappointing is how so many people you'd think were smarter are just ignoring all the clear dodginess going on. Andrew Bolt, for example, seems to think that everything is above board and that Trump is the one being unreasonable. 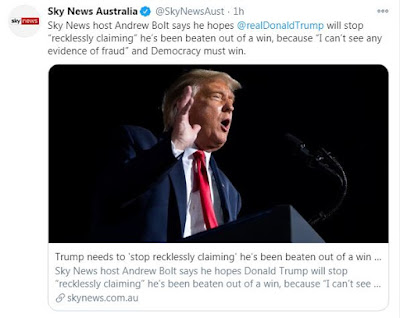 I have been losing respect for Bolta for a while due to his commentary on Dictator Dan's obvious COVID-criminality. While he's flayed him repeatedly, he's still been pushing the line that it's a dinkum terrible disease, and actually trusts the case numbers touted by Victoria's clown CHO Brett Sutton. But these have been yugely exaggerated without a doubt.

Now this. Sad to say it but he's basically "controlled opposition".

At least that's not as bad as all the usual suspects with full blown Trump Derangement Syndrome. Fascinating to watch how they all make nearly identical statements. It's like they all get the same memo.

The one they're flogging now is that all votes must be counted. If this isn't done democracy itself has been subverted!

If she said all legal votes must be counted, then yeah. But it's telling that she omitted that exact word or a synonym of it.

The reason Trump is saying "stop the count" is because it's clear fraudulent ballots are being included, and legal ones for him excluded. 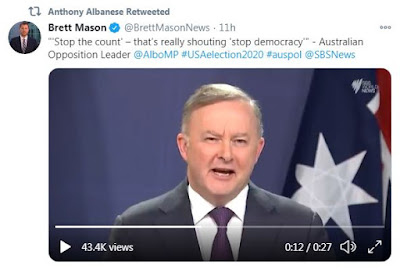 Props to Albo for creativity. He actually framed the disingenuous angle as an analogy. 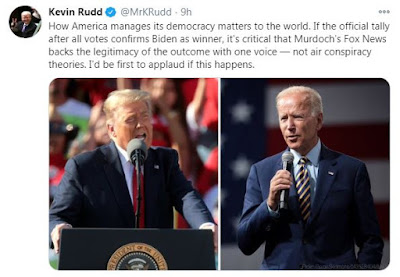 A typically self-important observation from Kevin Rudd. Love how he snuck in that classic thought blocking term "conspiracy theories" and managed to weave in his obsession with Murdoch, casting himself as a magnanimous champion of democracy all in the same tweet!

Speaking of official tallies, the US Election numbers aren't the only ones that don't seem credible. 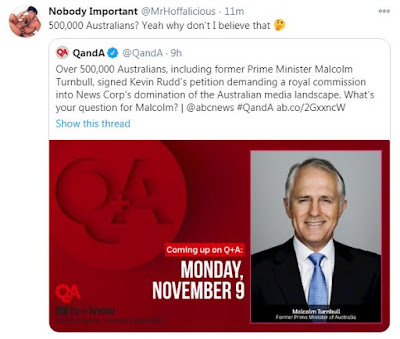 Rudd's relentless campaign against Murdoch -- here so shamelessly promoted by his fellow travellers at their ABC -- is just another manifestation of the globalist elite's anxiety about the prospect of four more years of Trump.

If he stays in the Whitehouse so many of their creepy plans for humanity will come to nought. So, it's no wonder that they're throwing absolutely everything at him.

Posted by MattHaydenAU at 9:02 AM