Dan the Man is a taipan fan

Daniel Andrews gets creepier by the day. It's not just the evil policies he's inflicting on Victorians, whom he has all over a barrel in a ginormous prison. It's the way he so clearly savours what he's doing. And he puts so much effort into his tweets, filling them with symbolism that is clearly meant for a select audience.

Take this one about a funding boost for research into infectious disease. He specifically mentions the taipan, a lethal Aussie snake. 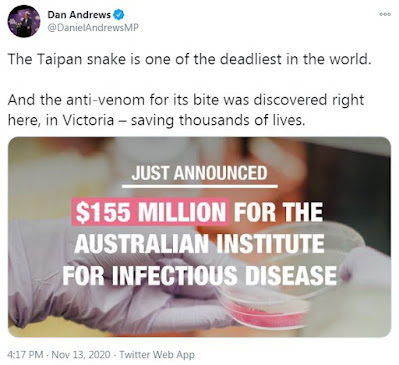 WTF have snake bites got to do with infectious disease? Wouldn't a reference to advances in that specific field be more apt?

Well, I think he used the term because of its alternative meaning: a senior businessman, or "big shot" operating in Hong Kong or China. It usually refers to one of European descent too. 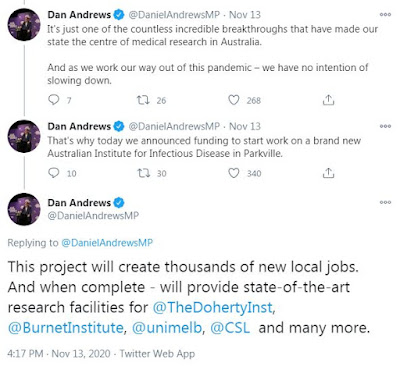 Remember that developing an anti-venom requires the snake to bite. The serpent in this case was the coronavirus "pandemic" which sunk its fangs into Victoria in a major way (at least according to the corrupt globalist media). That came out of China, remember. And the whole scam was orchestrated by those big shot (mostly European) globalists. If anyone could be called modern taipans it's the Carlyle Group.

They will benefit bigly from this crisis (that they had a major part in engineering) directly and indirectly including from mandatory vaccination. So I think this reference of Dictator Dan's was another secret nod to them, much like what he was doing in tweets about donuts and whiskey.

And given all his other creepy imagery, it might have also been a kinda sick Biblical reference. You know, devilish snakes in gardens and all that.

Though you never know, it might just have been about snakes and ladders. He did allude to going up in the world just recently, after all.