You may have heard of the sneaky practice of "dog comms", a method by which movers and shakers post canine-themed social media updates to communicate with others. The beauty of this strategy is that it looks so benign on the surface. What's not to like about dogs, after all.

It really is a twofer. You can send your coded messages to those in the know, while humanizing your public profile to all the normies who are none the wiser.

While it does seem that this technique is most widespread among the blue checks of Washington and Hollywood, some high profile Aussies appear to be using this method as well. 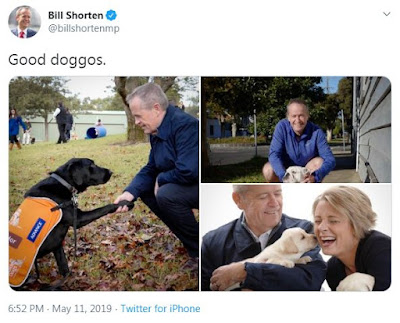 The above tweet was made just before the election last year. He was Labor leader and this was clearly part of his charm offensive. Thankfully, the tactic didn't work. Voting for Shorten would surely have been a very paw choice. (Turns out that ScoMo getting the gig has been a disaster also but that's another story.)

At the time I thought Shorten sharing these snaps was all about him promoting a cuddly image and that was the end of it. But in retrospect I think there was quite a lot going on subtextually. Of course I can only speculate but here's a theory:

Firstly, notice how Kristina Keneally is in one of them. That always struck me as strange because I thought if he wanted to include an attractive blonde why not his wife Chloe?

Now I think I know what he was saying. She's American, remember. His labrador puppy is "kissing" her. It was a coded way of saying that he, along with Labor, were still supportive of Hillary.

Remember that Aussie prime ministers have long been the puppets of the Deep State and globalist Cabal, something that Trump has been fighting his entire presidency. I think Shorten was saying to the Washington Swamp-monsters who monitor his social media that if he were to be elected, a Labor government would continue being extremely loyal to them.

Hence the guide dog photo. "You can show us the way, and we will follow your lead" was the message here IMO.

Then there's the text: "Good doggos." Translation. We will behave and obey you, not Trump. 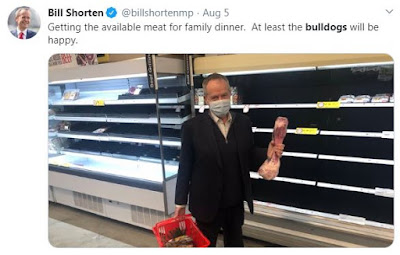 In recent months Shorten has been tweeting an awful lot about his pet bulldogs. This was one of the strangest of these updates.

It is such a humiliating pose, innit? The mask wearing is of course part of a global submission ritual. Also, why would he remind everyone how empty the shelves are in the failed state of Victoria, governed by his Labor mate and fellow globalist puppet Dictator Dan?

It seems unlikely that he would have done this willingly, off his own bat. It looks like he was told to do this to show obedience to some higher power.

Also, what's with that yuge bone? If you look at the photo closely you can see that while the shelves are quite bare there are still some packets of meat there. So he clearly didn't select it because it was the only "available meat". There is another reason he's holding that bone. And it's clearly the focus of the shot.

It struck me as strangely familiar, too. I knew I'd seen a photo like this before. I just couldn't remember where. But after posting the screenshot on Gab, Neon Revolt reminded me of this notorious shot. 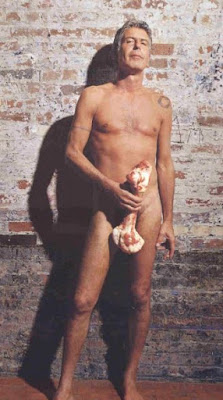 Could be a coinky-dink, sure. But seriously, what are the odds? I have never in my life seen anyone pose like Bourdain did above, holding a bone of that size and shape. That's what makes it so memorable. Then Bill Shorten is snapped holding one that is exactly like it.

Now I know he didn't nude up for it, and we can all be thankful for that. And he's holding it out from his body, so it's not meant to be a phallic symbol, but still ...

Maybe he was a yuge fan of the celebrity chef and this was a blackly humorous homage to the dead dude's memory? Somehow, I doubt it.

And they are both connected to Hillary in a strange way. Shorten, and his party are all "with her". So was Bourdain for a long while, then he (very publicly) stopped being so. Not long after that he also stopped, er, breathing.

So, if that photo was meant to echo that pose (which is quite possible) it's pretty creepy. Maybe it was a general reminder to stay the globalist socialist course; that "too many capitalist cooks spoil the Bolshevik broth" or something similar. But I suspect the symbolism was a tad more specific. Which is what worries me.

In any case the meal he said he was preparing with it was for his bulldogs. And he clearly worships them. 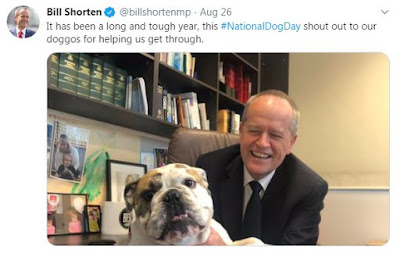 When it comes to coded comms it's always a good idea to Google highlighted or repeated terms. Trump, for example, has repeatedly talked about how he's fighting the "hidden scourge". Google that term yourself and see what comes up as the first result. (It's not coronavirus -- or even commie China -- in case you're wondering.)

Now if you do the same for "dog day" the first results are specific references to the actual date. So, no hidden meaning there. But then you get a Wikipedia page about "dog days" and their symbology.

The dog days or dog days of summer are the hot, sultry days of summer. They were historically the period following the heliacal rising of the star system Sirius, which Hellenistic astrology connected with heat, drought, sudden thunderstorms, lethargy, fever, mad dogs, and bad luck. They are now taken to be the hottest, most uncomfortable part of summer in the Northern Hemisphere.

Sirius is the "dog star". Sydneysiders will know of a brutalist apartment block named after it right next to the Sydney Harbour Bridge. It's been very controversial in recent years because the NSW State Government has been tryna sell it off and have it replaced with high-rise apartments.

Back in 2017 Clover Moore arced up big time about this, and seemed to facilitate that notorious "tent city" for the homeless in Martin Place. I think that maybe her affection for the fugly structure was more about the symbolism of the name than its ability to house hobos.

As this article describes, the dog star is big among the occult elite, particularly Freemasons. It's even featured in Masonic lodges, at the centre of their characteristic black and white flooring.

It's well known that many, if not most, high profile folk in Australia and NZ are Freemasons. They are extremely influential in politics, the MSM and the union movement. I think the odds of Shorten being a member are extremely high. (Same with Jacinda Ardern, and they are practically BFFs, right?)

They have an obsession with the duality of black and white. That's why I found this recent video of Shorten's quite interdasting. 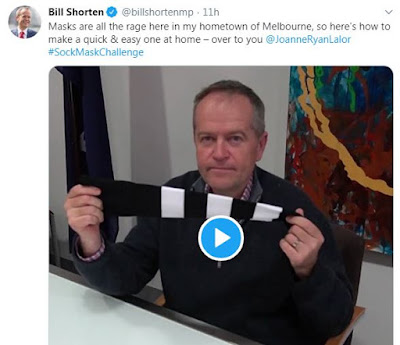 Remember that mask wearing is a globalist submission ritual, and he's encouraging his followers to take part in it. He also says that he's "in two minds" about cutting up his treasured Collingwood sock.

Is he invoking the idea of "duality" here? Seems likely to me.

Now, if you think I'm drawing too long a bow with this "dog star" stuff then check out this more recent video. 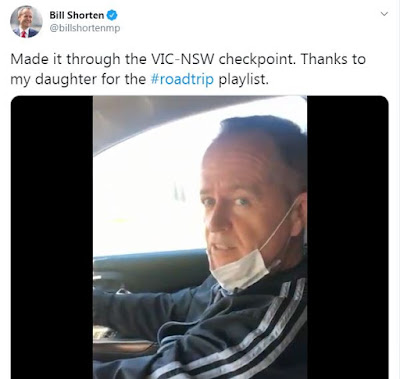 Notice how he's wearing black and white. He also mentions that he's got one of his bulldogs in the car with him. And he draws attention to the music he's been playing. What's the song in the video?

"We Built This City." Again, Google that song and you'll see the band who made it famous: Starship.

Like with the bone photo, ask yourself: What are the odds? 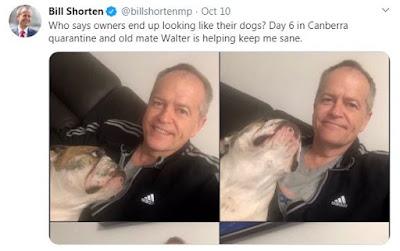 Again, he's with his dog and he's wearing black and white. And notice how the Adidas logo is shaped like a pyramid. This has long been a fave symbol of globalist "New World Order" types and and I don't think it's an accident that it's visible here.

Another video, this time cut from an interview he did on some stupid MSM show. 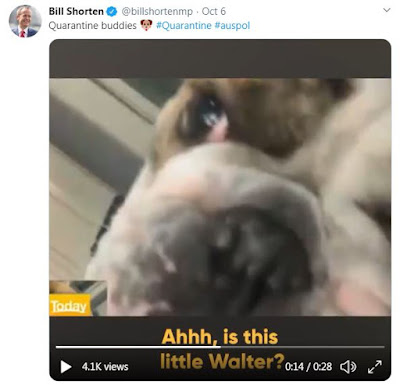 That dog really is a star innit?

I'm not saying that's exactly what he was implying, obviously. But I'm sure get my drift: Why so many photos and mentions of dogs? To say that this is some kinda symbolic incantation is not a stretch IMHO.

Oh, and Julia Gillard tweeted this canine-themed update not so long ago. The character Bluey has its own kids' show produced by Disney, BTW. 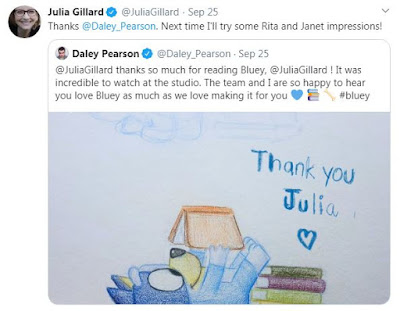 Now the doggie-dots I discern are somewhat distant from each other but I'll still join them anyhow: Notice the blue and white theme in the drawing of the toon-pooch. And see how the books evoke a kinda house or building shape with the roof being gold?

What are the colours of the walls and dome on that creepy temple on that island owned by that evil dude who "killed himself" by a method also allegedly used by Anthony Bourdain? More "occult elite" symbolism? Prolly unlikely but not impossible ...

As George Carlin so memorably stated: "It's a big club and you ain't in it!"

Long time Q followers will know about how James Comey tweeted about the death of his dog, and Joe M postulated that this was a signal to those in the know that George HW Bush had died because his code name was "Timber Wolf". In retrospect, this theory seems to have been bang on the money.

That context makes this update from Kevin Rudd very intriguing. 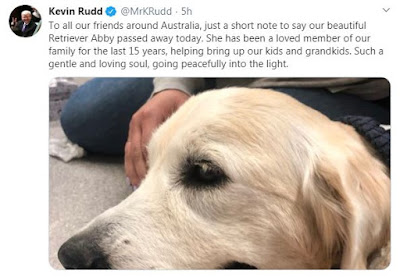 Notice how it very specifically says Abby went "peacefully into the light" (not night, the usual metaphor used to describe death).

Then there was this very quirky handball video from late September. 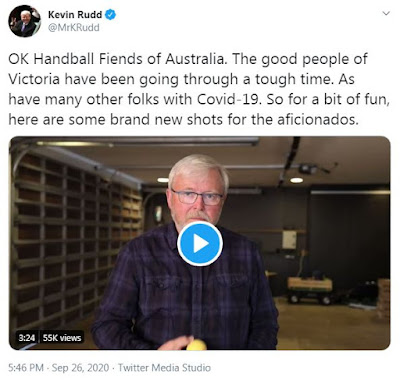 Please check it out, then watch my video breaking down what I think it was all really about below. It's clearly meant to be symbolic and there are repeated, featured references to "dog shots" in it. He also mentions black and white near the end.
I do go "handballs out" with my speculation under the crown -- just as I have done with this blog post. I have no specific predictions or claims to make about what Rudd et al are up to but I am sure there's another level to all of this and it has something to do with their allegiance to the globalist elite, Hillary in particular.
One thing's for sure: These Labor illuminaries are cooking something up either together or -- more likely -- on their own. I suspect there may well be one or more big habbenings during the dog days of summer.
I smell a bad spoon rising, which is why I've got a bad taste in my mouth already. No way I'm wearing a mask, but!
Thanks for reading, and if you've enjoyed this piece, please consider supporting me via Ko-fi. Aussies, know your rights!
Posted by MattHaydenAU at 2:39 PM