Signs of the globalist elites' agenda are everywhere

It's been amazing to watch the American mainstream media shamelessly, relentlessly push the "Russian collusion" hoax for two years in an effort to destroy POTUS. Now that they have been totally exposed by Robert Mueller's official conclusion that there was "nothin' to see here, folks" their credibility is in tatters.

When you realize how brazenly these scumbags lied about this, you wonder about all the other stuff they're "reporting" on. Surely many of the narratives that these yugely powerful corporations have been pushing for decades are dodgy as all get out, if not entirely false.

Having come to this realization, I'm becoming more and more convinced that conspiracy theories about the New World Order and specifically the Illuminati actually have a lot of truth to them. It feels weird to have come to that conclusion because even a year ago I would have said these ideas were total bollocks and anyone who believed them needed to take his tin-foil hat off!

But since I've become a newbie "truther" I've been seeing signs and symbols that seem to reflect this agenda all over the place.

Take the eye symbol. This is of course synonymous with the Illuminati.

You should, er, keep an eye out for it. You'll see it in heaps of public art -- also in advertising. Take this display for a recent show. 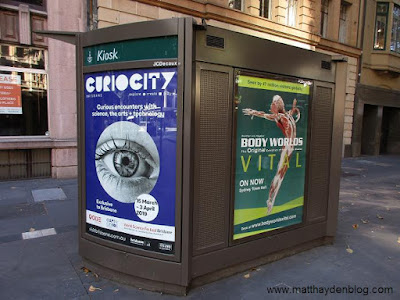 On the other side is an ad for another one, Body Worlds, which also has a creepy NWO vibe to it. Remember that the control freaks at the top of the pyramid have the ultimate goal of enslaving humanity in a fascist globalist state.

To achieve that, they have to indoctrinate everyone with the belief that human beings are nothin' special -- that the soul doesn't really exist. This is why they hate Christianity with a passion and they're such zealous advocates of abortion, among other things.

Displaying actual flayed human corpses to the public -- kids included -- seems to be part of this process. Sure, they say it's about demystifying humanity. But it's also dehumanizing, surely.

Now I'm not saying that all those involved in these shows are secret society members, or even aware of this agenda. But it's interesting that such projects get funded, right? They must be massively expensive to produce. Only heavy hitters could get them up and running.

It's like with Hollywood productions. The A-list producers and agents decide which movie projects get the big money. It's well established that Tinseltown is chockas with Illuminati freaks. And no wonder. It's the "dream factory" -- the place where narratives are created, and for the entire world.

Similar process here, I reckon.
Posted by MattHaydenAU at 12:09 PM