I spy with my little eye ... lots of other eyes!

I mentioned in a previous post that I'd been seeing heaps of occult symbolism, specifically eye symbols everywhere. So I've included some below.

But just to clarify: I'm not claiming that all those who produce these images are in on the global conspiracy and are consciously creating them to brainwash the masses for their eeevil overlords. What I believe is that these symbols have been seeded into the culture from on high over many years.

If you start to look into this whole subject with an open mind you'll realize that the New World Order really is a thing and secret societies are a big part of it. Without a doubt many powerful people at the "top of the pyramid" have long been using popular culture as a way to "preemptively program" the masses.

It's like with the fashion industry. Normies are led to believe that fashions in clothing, hairstyles etc rise organically, bottom up, from the people themselves. But it's actually the other way around. Taste makers plan everything in advance and decide what the fashions for the year will be. Then they roll them out as if as if it was some sort of democratic, popularity-based process.

Another analogy: Even though there's been a sustained, massive campaign on many fronts to erase Christianity in Australia and other countries, its symbolism is still pervasive and powerful. We all know what a cross represents. And even if you're not religious you more than likely use the phrase "Oh my God!" to express shock.

That's because of the residual power of the church having seeded the culture with its imagery in the West over centuries.

That's what's going on here, though kinda in reverse. The Illuminati don't openly control society like the Church did. They just pull strings from the shadows. And they're making sure that we're all primed for when they do get to, er, come out of their dark mansions, so to speak.

With this in mind here are some examples of eye imagery that I didn't even look for. I just went through photos I'd been taking and selected some that included it. 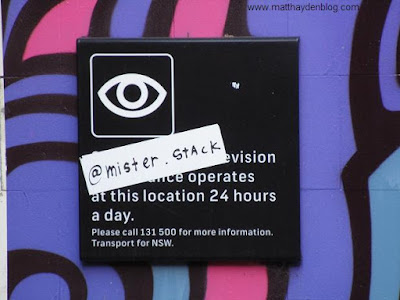 Got this CCTV sign in Petersham subway. Just a reminder that "Big Brother" is watching. (Interesting that it's the title of a reality TV show that's been running for many years.) 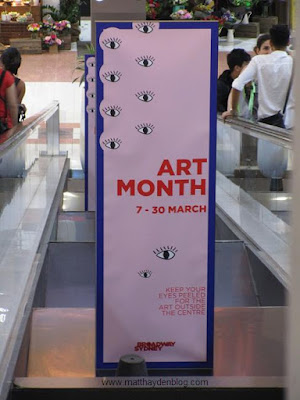 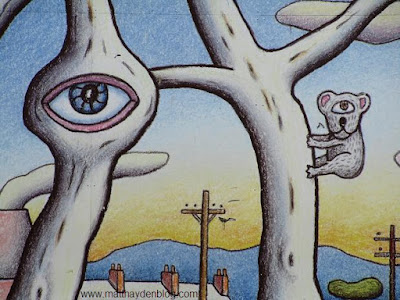 This is part of what covers the scaffolding around a construction site in the city. I think it's a print of Reg Mombassa's work. 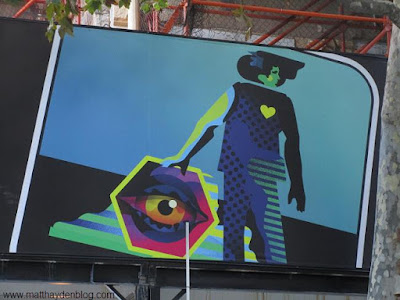 This is from another construction site. It was chockas with occult imagery. I'll write a whole post about it when I have time. 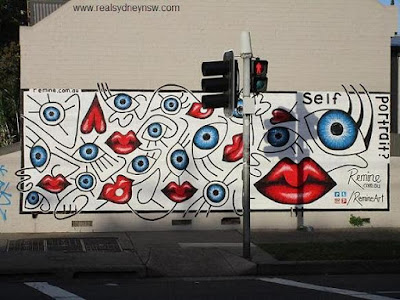 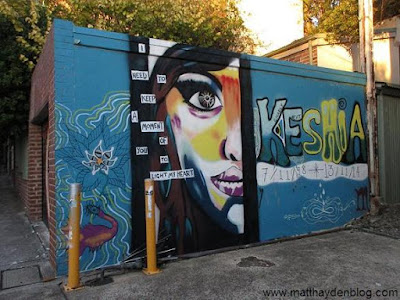 Interesting that it shows a pop star, Keshia. The music industry is absolutely chockas with this kind of stuff.

Every A-list rock star has flashed the Illuminati eye on occasion. It seems to be a prerequisite for stardom. Hell, even living legends like Paul McCartney are known to, er, "genuflect" in this way.

The rabbit hole is deep, people. And the all-seeing eye is everywhere ...
Thanks for reading, and if you've enjoyed this piece, please consider supporting me via Ko-fi.
Posted by MattHaydenAU at 12:12 PM