The Project should win an award for PC propaganda

Pretty obvious that the entire MSM here is captured by cultural Marxists. They relentlessly push the PC line on all issues, while purporting to be fair and balanced.

It's depressing to see it in the ABC -- even more so in the commercial media. You would hope that market forces would prevail. But they don't. That's because all the big media companies lean left. Perhaps the most reality-based is News Ltd. But even that's chockas with right-on muppets. It just has a few righties to even things up a bit.

Whole landscape is like big tech. It's a collective monopoly type situation. TV is prolly the worst in this regard. The big free to air channels Nine, Ten and Seven have such power, influence and reach built up over many decades that they can afford to inflict this toxic cant on us and it won't hit their bottom line hard enough to mean they have to accept other narratives.

So, sadly, political correctness runs right through the MSM. And surely one of the most seriously infected programs is The Project. It's gotta be the dumbest, ugliest show on the teev for sure!

Even the name creeps me out: "The Project." Makes it sound like a sinister deep state psyop or something; an experiment in brainwashing the yoof by utilizing vapid twats peddling PC talking points.

The sleb-soaked sneerfest proclaims itself to be "news delivered differently". Sod off! Fake news delivered smugly, more like. Whole vibe of the show is creepy and wrong. 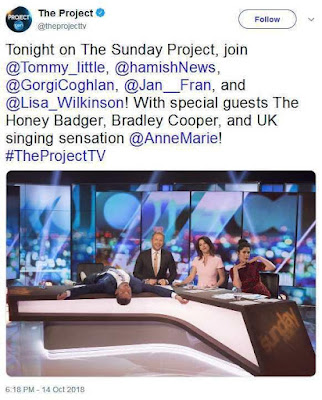 FFS, fakery fills every fricken pixel! Even their "spontaneous" mischief reeks of self-consciousness and insincerity. It's meant to seem down to earth and self-effacing. But any sane person can tell they're elitist poseurs peddling a malignant agenda. 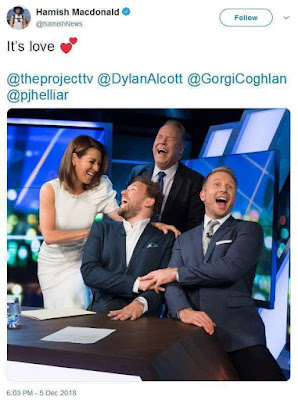 You look at these vapid twats and think why the hell are they so pleased with themselves? They're not there because of skill or merit. Their fame -- and therefore their implied authority -- is entirely conditional. They have to keep peddling the narrative that's given to them, or be punted if they don't. 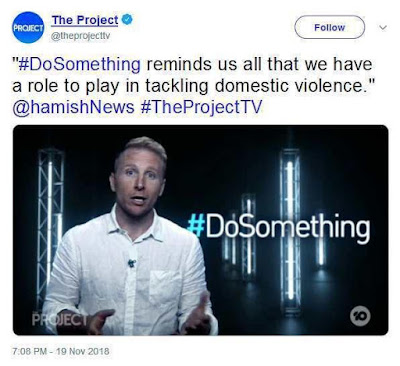 Hamish MacDonald earnestly trots out the "all men are to blame" bollocks. And he calls himself a journalist?

No way. Like so many of them now he's just an activist. If he were interested in the truth he'd say: "Wait on, that's a crock. If some arsehole beats his wife all men aren't to blame. He is!"

He'd start asking questions of those pushing such an obvious lie. Instead, he obediently repeats it himself.

And it's echoed by zombie viewers on the next level down.

Latest campaign the show's sinister sleb-bots are pushing is that the Barry Award should be changed to something that doesn't have "transphobic" connotations.

The whole transgender thing is part of something much bigger. It's like the "Islamophobia" lie that demonizes anyone who makes pointed criticisms of Islam. Sliming people as "transphobic" for simply pointing out the bleedin' obvious is clearly designed to intimidate and confuse the normies and thereby weaken society's foundations even more than they are already.

And renaming an award that echoes the legacy of an Australian cultural icon is akin to knocking down a statue of Captain Cook -- though on a much smaller, milder scale of course. 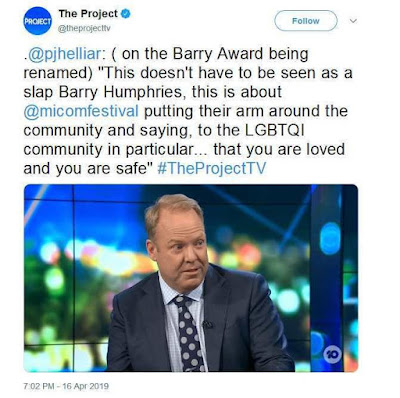 Look at this chubby muppet quacking on about love, safety and inclusiveness. Oh, FFS!

Whoopsy! My bad ... He did get a memo, and that's what he's reading out above. If he has any of his own thoughts, which I doubt, he knows better than to express them. In PC TV Land wrongthink is verboten -- The Narrative Is All!

As we all know, the PC Left are lying all the time. It's all they can do. Their whole worldview is a massive, reeking pile o' porkies, after all. And they have to relentlessly inflict these falsehoods on the rest of us to try and make them come true.

So if they say that this "doesn't have to be seen as a slap to Barry Humphries" that is exactly what it is.

And it's quite obvious why this is the case. Humphries has long been a prime target for cultural Marxists. He is a tall poppy, and one of the few conservatives with cultural power in Oz, after all. So for them this is a twofer, really.

And The Project is their tool box -- sorry, box of tools -- for conning the masses.

But more and more people are waking up now. You've really gotta wonder how long they can keep this creepy clown show going. The whole con has to fall apart eventually, surely ...
Posted by MattHaydenAU at 10:53 AM