To PC lefties everything's political ... and nothing is

We all know that PC lefties lie all the time. They just can't help themselves. Also, if they didn't do this, they would never have achieved the power and influence they have so far.

The ultimate goal for these sad, desperate creeps is control of others -- the more the better. And while they all share this affliction greenies are the worst. Pretty clear that they are "watermelons" -- green on the outside and red underneath!

While radical cultural Marxists do sometimes resort to violence (eg Antifa) they prefer not to. Why use biffo when you can achieve the same ends through stealth? It's worked a treat for them so far. They've been subverting institutions for ages, and now control many of them outright.

Just look at the universities. Free speech, and therefore free thought, is verboten at most of them now. And they have pretty much become petri-dishes for mental illnesses that can be weaponized for even more audacious power grabs down the track.

Not only are PC lefties always lying about their true intentions, they're doing it on many fronts simultaneously. They politicize absolutely everything! It's a tactic well summarized by the feminist phrase "the personal is political".

Among other things, this is to keep us all in a state of confusion and insecurity. If the masses are distracted, radical changes can be implemented bit by bit without them noticing.

In their relentless effort to deceive, and ultimately control, the population, cultural Marxists will go to the opposite extreme as well. They'll claim that what they're doing is not political at all. 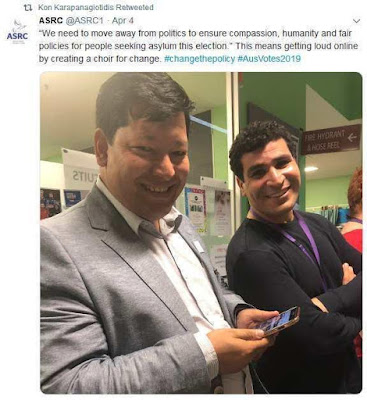 This tweet is a perfect example. The ASRC is claiming, and with a straight face, that "getting loud online" and thereby "creating a choir for change" is actually a way of moving beyond politics!

Ultimately the ASRC is a highly political organization. Underneath all its fine talk, it's clearly supportive of the erosion of sovereignty. That's because sovereignty is one of the main foundations of nationalism, which international socialism is desperately trying to erase. But the ASRC masks this goal with a whole lot of touchy-feely, huggy-wuggy bollocks about compassion, tolerance, and all the rest of it.

And here's another example of deceitful language: "radical empathy". 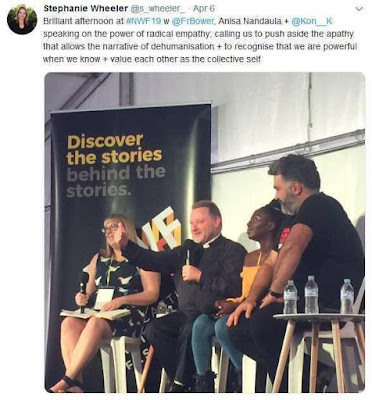 The verbose tweet above is a convoluted way of saying: "You should all get political with us! We can all get shouty and demonize the wider culture by claiming it's riven with racism, sexism, homophobia, etc."

Doing this is just sooo important to these right-on influencers and their ilk. That's because once they've got the main societal foundations crumbling, they're much easier to destroy completely. And once that's done, a global top down socialist regime can replace it. In fact it has to replace it because the only other alternative is chaos.

That is always the end game for the PC crowd. But they can't actually come out and say that because the whole idea is so repugnant to sane adults. So they use terms like "radical empathy" which makes it sound like they're noble and selfless.

It's a term that someone like Sarah Hanson Young would happily use -- if she doesn't already. But remember what she said when over a thousand asylum seekers drowned as a direct result of policies she supported: "Accidents happen."

Don't believe anything these people say even for a minute. Keep watching them with a critical eye and sooner or later it'll become clear what they're really after.
Posted by MattHaydenAU at 11:57 AM