Political correctness is a thought blocker

Pretty obvious that socialists love to control people. Not only do they get off on it, their whole ideology requires it. It's a top down system, after all.

They've got this crazy idea that they can create a utopia by bossing people around. If you've got your thinking cap on, you'll immediately realize that this is just not gonna work. You'll also look at leftism's gruesome history of failure. The further left you go, the higher the body count.

Why anyone would subscribe to any kind of Marxism -- particularly the cultural kind -- is incomprehensible to any sane, rational, thoughtful person.

And that's the key to its, er, appeal -- for want of a better word. You'd only subscribe to it if you're not actually thinking.

Which is how this "mind virus" infects, and ultimately converts people. It installs a set of rigid dogmas to do with race, gender, sexuality, the environment and other things in the brain, associating powerful negative emotions with any deviation from them. This is political correctness, and it's a self-replicating system.

Once a person's mind has been captured, individual thought about these subjects is pretty much impossible. This is why PC lefties are so spectacularly hypocritical. It's not just that they are self-centred and therefore unwilling to hold themselves up to the standards they demand of others (and we can all be guilty of that, let's face it!). It's also because they aren't thinking.  They are just obeying. 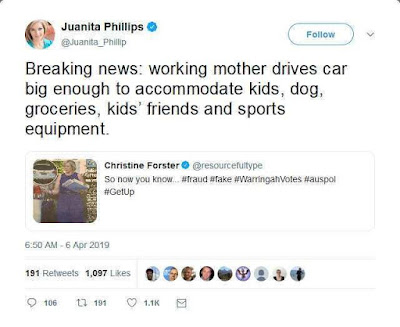 Seeing that her fellow traveller Zali Steggall was copping a shellacking on Twitter, she tweeted a dopey defence. Clearly the criticism was of Ms Steggall's hypocrisy, not simply her choice of vehicle. Sane adults such as Christine Forster were pointing out the so-called independent's refusal to walk -- or rather, drive -- her talk on environmental issues.

But Juanita just completely ignored the wider context. Her PC programming left her incapable of doing this, and so she went straight to the "woman as victim" defence -- another major component of cultural Marxism.

Here's another example. Recently Tim Soutphommasane tweeted on the subject of Ita Buttrose becoming ABC Chair. He sternly reminded her of the need to follow the ABC Charter when it came to ethnic diversity.

I took a screenshot of that, and made a criticism of Tim and his selective interpretation of this document. He got wind of it, and clearly didn't understand the point I was making ... because he wasn't thinking.

Ironically he thought that's what my problem was! 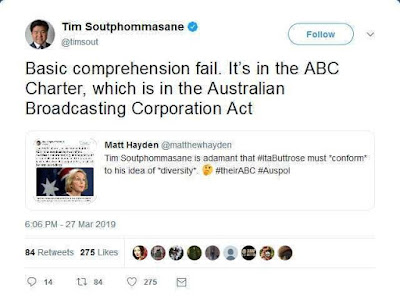 He just couldn't see that I was making a point about the narrow focus of PC types like Tim himself. They see "diversity" only in terms of identity, not ideas. And the ABC Charter requires balanced reporting (ie diversity of views).

Would Tim want more righties in our -- sorry, his -- ABC? No way. That was my point.

He basically cherry picked an aspect of the charter to castigate Ita, but ignored the wider context. This is what PC does to you: It renders you incapable of thinking for yourself. All you can do is follow orders, and give them.