Lefties are forever quacking on about how they want freedom for humanity. But that, like most of what they say, is total bollocks. They want everything centralized so that they can control it. And they want the whole population to subscribe to the same narratives that they dictate. Socialism is clearly an authoritarian, top down system.

Being such control freaks, they are deeply unsettled when the plebs think for themselves and start questioning the "official narrative" that they've been given. Look at what's happening in the USA, with the mainstream media and their humongous two year long porky about Trump and collusion with Russia.

Millions of people across America and the globe are realizing that the MSM are just pumping out titanic lies all the time. They're sharing dissenting views on social media, so the lefties who own these platforms are desperately trying to stifle that process by flat out punting prominent nationalists, conservatives and the like -- or at least inhibiting their reach.

Of course there's heaps of other evidence that the Left prefers dummies and dupes to thinking voters. And here's a local example. It's just a tweet, but I thought it was quite revealing. 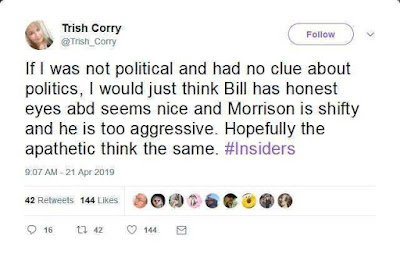 Below is the tweep's profile. Clearly your typical "feelings over facts" lefty. 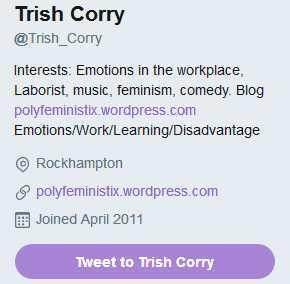 I really don't think she's being tongue in cheek with that tweet. Shorten (whom she calls "Bill") has had a horror week, being unable to answer questions about how a Labor government would fund its promises, among other things.

Rather than expressing the wish that the Labor leader would get his arse into gear and have some facts at the ready for the next press pack attack, she basically says she hopes that ill-informed and disengaged voters will be calmed by his "honest eyes" and still vote for him!

Yet this kind of thinking is par for the course with the Left. They try to appeal to the lowest common denominator and get over the line that way. And whenever they are in power they try to dumb the electorate down even more! No wonder they are all for compulsory voting. Means a good whack of those participating aren't interested in the issues and are only doing it because they have to.

It's also why the Greens in particular keep pushing for the voting age to be lowered. We all know that the younger you are, the less you know about the world and the way it works. Whippersnappers are much easier to con with crazy talk about climate catastrophe and all the rest. And the Greens are absolutely shameless in doing just that!
Posted by MattHaydenAU at 12:33 PM