By now pretty much anyone with a functioning brain, and who can use it to do just a little bit of independent thinking, can see what utter bollocks the whole climate change religion is. FFS, even if the most extreme measures are adopted in this country and we cease all fossil fuel use immediately, the effect we'll have on global temperatures is damn near zilch!

But still the globalist socialists press on with their ginormous lies. They're just sooo important to their ultimate plans to control the masses in as many ways as possible.

And the way they've been targeting kids is creepy as all get out. The whole AGW religion is drummed into students from primary school onward. They must be instilling such terror in so many young minds! What a cruel thing to do.

And remember that many of these same people are self-described atheists who say that Christianity is child abuse because it uses the fear of eternal damnation to scare kids into following its rules. But isn't this exactly what the warmists themselves are doing? They are just using predictions of a hell on Earth instead.

The various climate strikes that have been going on across the globe are the most obvious example of this despicable exploitation and manipulation of children. There's no way known that kids themselves could dream up and organize these events. Yet the activists behind them and their dutiful fellow travellers in the media push the bogus narrative that these are organic happenings initiated by students themselves.

Some of them, like Dee here, frame the subject as a free speech issue. Typically dishonest, and dumb.

Firstly, the kids are not expressing their own deeply felt beliefs, in opposition to what they've been taught. They're just regurgitating what's been drummed into them in class as well as pretty much everywhere else through the MSM.

Many teachers are of course active participants in these demos. And even if they aren't, few of them seem to have made any effort to stop the students from attending. That's because most of them have been indoctrinated as well. And if they remain skeptical about the impending global catastrophe due to "carbon emissions" they're scared of being outed as "climate deniers".

Then there's the fact that many of the students attending the "Climate Strike" are just totes stoked to have time off from classes. I can remember when I was a whippersnapper myself, and how much fun it was to go out on an excursion. Being an obedient little goody-goody, I never actually wagged school. But boy did I ever want to!

This is an ideal outlet for all that youthful energy. They are encouraged to get out there, yell and scream their lungs out, and feel really important about it too. Hell, they might even end up on the telly! What's not to like? 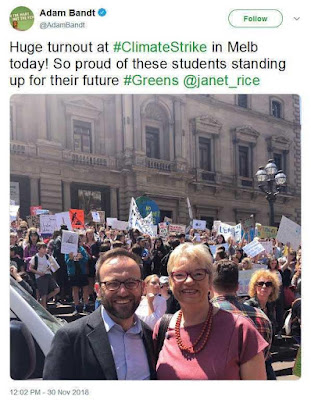 And the deep green lefties pushing the whole psyop are over the moon about it too. Nothing they want more than to turn the yoof against the oldsters. The younger they can get hold of them psychologically, the better.

These wretched, empty souls have no real inner life. So they live to wreak havoc on everyone else's.

They're immensely pleased to see the extent to which their absurd, apocalyptic narrative about the environment has been implanted into the minds of so many young folk.

Many brainwashed kids are now, in a sense, theirs for life. And don't they know it! They'll be sure to get the most value out of them they possibly can as the years go on.

The malignant, controlling creeps will also take what they've learned from this process and apply it to other fronts in their sinister war on Western Civilization.

How the hell did we let things get so crazy? We've really gotta stop these loathsome freaks from carrying out their global agenda.

It's already madness. But it's only the start.
Posted by MattHaydenAU at 2:32 PM