Father Rod Bower is having a "Funeral for Coal"

Oh. My. Gawd. Father Flog is having a "funeral for coal"!

Will the poor deceased lump be cremated, I wonder? That would be a faux pas, eh? Saying "ashes to ashes" would be too ...

Sadly for Rod Bower coal won't cark it. But his silly stunt will surely kill satire stone dead. Black comedy or what! 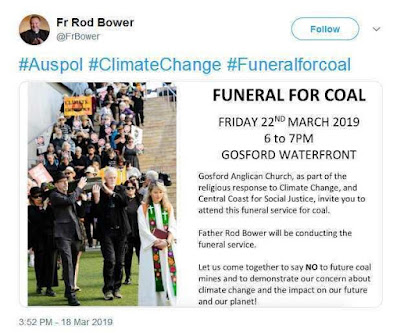 Apart from the general idiocy of this clerical clown show, why is it coal that deserves the funeral? You only conduct a mourning ceremony over someone or something that you cared about, right?

Didn't think this through, did ol' God's Rod. But then, PC lefties never do. It's all about the feels, and in Father Bower's case, mining as much publicity as possible from the child-brained lefties who dominate our MSM. So asinine, and stuck in their emotive ways are these fossil fools ...

Also, as some have pointed out on Twitter, performing this faux ceremony cheapens the whole idea of a funeral, dunnit? And remember, as a priest Father Rod is qualified to officiate at them.

In future what will families who had him administer the last rites to their loved ones think when they learn that he did the same for a fricken lump of coal?

Not a good look from a man with The Good Book ...

But given he is so determined to trivialize the rites and rituals of his own Anglican faith, I reckon a baptism would've been the go -- though obviously not a "baptism of fire".

He could blissfully announce, say, the virgin birth of solar power, then give it his most holy blessing. Would be far more optimistic and positive than what he's gonna do now.

Better still, no props required! Dude reckons the sun shines out of his arse, after all.
Posted by MattHaydenAU at 1:07 PM