Samantha Dunn was wise to leave the narcissistic, toxic Greens

A Greens MP in Melbourne called Samantha Dunn has quit the party, citing her reasons in a long Facebook post. Interestingly, she specifically uses the term narcissism. From having known a few greenies over the years that's exactly the word I'd use too.

While some suffer from the classic individual personality disorder, it's more of a collective version of it with these far left types. They have built up this utterly false narrative about the world and their role in it, and they use everyone around them as fodder to keep it going inside their tiny minds. 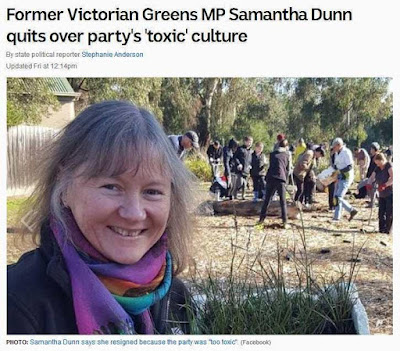 Instead the Greens are distracted by populism, self interest, power, ego, narcissism, megalomania, appealing to narrowcast demographics and virtue signalling while exercising that old war strategy of divide and conquer.

I can no longer stand by and witness continued institutionalised victim blaming. I have seen people broken by this outdated and brutal organisational response, it is inhumane, driven by political expedience, and it will be at the long term peril of the Greens.

At a recent Greens meeting I saw people being vilified, experienced unsafe behaviours and had to endure the typical dose of toxic behaviours that are all too prevalent in the Greens. All of this by people in leading positions. It is a snapshot of what is wrong. There is an inability of the party to reinforce positive culture, to address conflict or to even be polite to each other.

Gawd. That is one scary picture she paints.

It's like the casual nastiness that deep green lefties display constantly on Twitter stays with them in real life -- even during interactions with their peers. Who'da thunk it?

Just reinforces what I concluded a long time ago: The further left you go, the more miserable people get. They are so driven by hatred, envy and the lust for power that they can't even be nice to each other!

And they say that the world will be some kind of utopia when they're in charge globally? FFS! 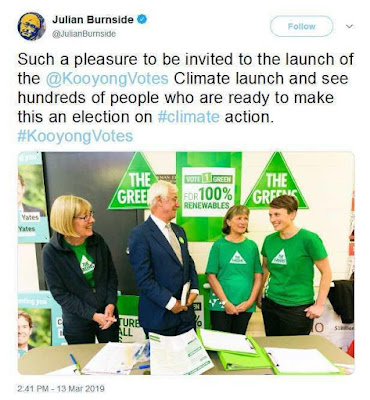 Gonna be really interesting to see how Crown Jules fares in his new role as Victorian Greens candidate.

He certainly has the requisite massive ego and delusions of grandeur. But he seems quite a genteel ol' dude; not vicious enough to cut it in that slithering viper's den.

I think he might bail before too long. What do you reckon?
Posted by MattHaydenAU at 11:21 AM