There's been a helluva lot of interest in conspiracy theories of late and that's sure to increase locally as a result of the banning of David Icke. Needless to say, leftie types tend to think of them as a deplorable, conservative phenomenon. Start questioning the official line on, say, vaccines and they sneer: "Get your tin foil hat off, mate. You're a paranoid RWNJ!"

That cracks me up because lefties are just as given to "out there" speculation as righties. Take the Russia collusion narrative. That is just total BS from start to finish. Yet they've been running with it hard for two years now. Then there's the biggest conspiracy theory of them all: PC feminism.

Sadly, squillions of sour, swivel-eyed "sisters" insist that men in general and white men in particular have managed to oppress women as a group globally for all of recorded, er, herstory -- cunningly convincing them to "participate in their own oppression" via institutions such as marriage while simultaneously being Neanderthal, drooling thugs who wouldn't know shit from blackberry jam.

It makes no sense at all and annoys the crap out of any sane and reasonable bloke. Independent-minded women have had a gutful of it too. Yet if you quiz this batshit theory's most zealous proponents and say "Well, who exactly are the members of this patriarchy then?" they are stumped. They roll their eyes and claim that "it's not an actual network; it's a cultural system" or some such bollocks.

Eh? But how can such a system operate in the real world if not through individuals? They say that I am a beneficiary of this system. Well, I'm a real person with a name. So what are the names of those above me with so much power and privilege that they can toss a little my way merely because I, like them, am a "pale, stale male"?

It's a perfectly reasonable question but they can never even start to answer it. And it gets even sillier ...

Yes, feminists have long been arcing up about men's only clubs (while simultaneously demanding safe spaces for women, the hypocrites) but they routinely cut massive slack for pallid dudes who are the clubs' fully paid up, card carrying members if they dutifully mouth their right-on claptrap, promoting gender quotas and the like. 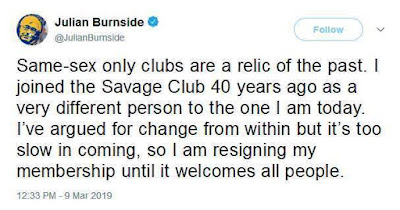 Surely heaps of feminist chicks -- particularly in their ABC and other love media outlets -- would have known about Julian Burnside's membership of that notorious Melbourne meeting point for misogynists. But because he was an ideological ally they kept mum, letting him portray himself as a sincere, principled believer in their definition of gender equality.

If he hadn't thrown his hat in the ring politically by joining the Greens, necessitating a more comprehensive level of media scrutiny, nothing would have changed. Feminist "journalists" wouldn't have called him out on it and he would have happily kept on patronising the Savage Club like he always did.

But it's heartening to know ol' Julian Blindside has finally had to look at himself in the mirror square on, acted decisively and suffered at least one unpleasant consequence as a result of his years of sanctimonious virtue signalling.

As we all know, walking your talk requires "balls". Now that's he's actually grown a pair he leaves ... an all-male club! How funny is that?

But I shouldn't be too harsh on Burnside alone. Hypocrisy loves company, of course.

Which is why I was curious about which other high-profile bolshie bobos might lob there to chin wag with other fake egalitarians, sneer at the have-nots they pretend to give a rat's about, and indulge in other smug elitist shit that keeps 'em feeling so spesh.

First guess? Radio National's fox hunting poseur Jonathan Green. So I go to his Twitter profile and what's the very first thing I see? This tweet!

FFS, they are sooo predictable, aren't they?

Not only is he a pompous arsehat -- just listen to him for even ten seconds and you'll be sure of that -- he's an utterly humungous fake on the gender politics front. In a way he's worse than Crown Jules, IMHO.

He spends his days dutifully peddling his faux compassion at Australia's cultural Marxist HQ, oft condemning others for their wrongthink. Yet he is the very definition of a privileged white male -- the cause of all the world's ills according to his own asinine ideology.

But he refuses to offer his gig to a member of an oppressed minority group -- surely the, er, left thing to do in this case. (And it could be a win-win if he did. Bound to be plenty of, say, black chicks who could run rings around him in many ways.)

Then, after all that, he has the gall to "cut the cheese" in that tweet. Not just a whiff of hypocrisy -- a full-on, fetid stench!

But back to the Savage Club specifically, and how it relates to conspiracy theories of the more traditional, right-wing kind. 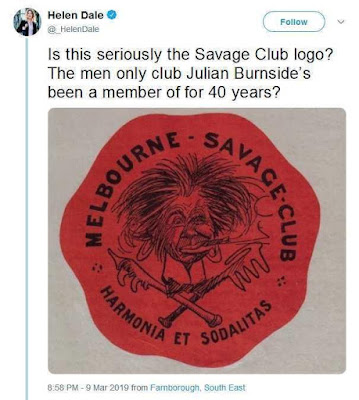 Turns out the original one is in London, and has long-been associated with Freemasonry.

As anyone who's ventured down even a few "rabbit holes' of late will know, these secretive dudes have been up to all kinds of tricky shit for centuries.

It's so apt that this dinkum, bricks and mortar boys' club in Melbourne is a favoured meeting place for stupendous fakes who peddle the massive myth of an unseen global one (the patriarchy) for their own benefit, cynically exploiting the "woke" women around them in the process.

Really, chickybabes, can't you see how long this has been going on, and how these arseholes are using you, laughing at you behind your backs all the while?

Wake up, feminists, FFS, before it's too late.

Posted by MattHaydenAU at 5:21 PM