The banning of David Icke was OTT and sinister

You may have heard that the hugely popular and controversial British conspiracy theorist David Icke had his visa cancelled just before he was ready to come to Australia on a multi-city speaking tour. The decision seemed very suss for many reasons including the fact that he's been here several times before without any problems at all.

But the reason given was that -- among other nasty things -- he's a Holocaust denier and anti-Semite. Well even if he is I think the better approach is to let him speak and then show what bollocks he's spouting with facts and evidence.

That said, from what I can tell he's neither of those things. And I'm not the only one who believes this.

I'm no expert on the guy. I've only recently discovered him and have watched several videos in which he expounds his theories. I'm also half-way through one of his early books and it's actually really interesting. He's a thoughtful and sincere dude with a fascinating life journey who does a lot of research.

I can understand why he's been given those labels, though. Like many conspiracy theorists he talks about the centuries long campaign for totalitarian control of the entire world by various powerful families, some of them banking elites. The most well known of these are of course the Rothschilds, who are Jewish. But he also includes other bloodlines across the globe. Many of these are not Jewish.

Anyhoo, does demonizing one or even many powerful Jewish families mean you hate the entire ethno-religious group? Hardly.

That kind of false argument is what you often get from feminists, BTW. Point out how crazy and toxic their beliefs are these days and frightbats will point and shriek "misogynist!". What a load of bollocks. Feminists don't represent women generally any more than I represent feminists. Think I represent feminists?

Then there's the fact that claims about his so-called "Holocaust denial" go way back to 1995. So why did they let him into Australia several times after that?

He also concedes that something catastrophic happened to Jews in World War Two. You can see him do it in this interview on Studio Ten. The panel pushed him to use the word Holocaust and he seemed reluctant to do so.

Okay, I can understand people being somewhat perturbed by that. But that's Holocaust prevarication, reinterpretation, or skepticism, maybe ... It's not flat out denial. And that doesn't sound quite as eeevil, does it? 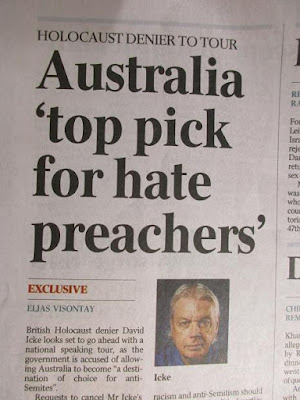 So, the angle that he's some kinda David Irving character just doesn't hold up IMHO. And here's another illustration of that: Google searches will tend to give you a sense of what a public figure's focus is. Type in "David Irving" then add "h" and the drop down menu will supply "Holocaust". Do that with David Icke and you get "hologram".

Which of course makes perfect sense. One of his main theories is that we are all part of a multi-dimensional show engineered by some awesomely powerful and mysterious force. It's like when Princess Leia says "Help me Obi Wan Kenobi" in Star Wars, but on an infinitely grander scale.

It's much more accurate to call him a "hologram believer" than a "Holocaust denier", surely!

And that is a pretty out there concept, of course. He has plenty of them, not least of which is the idea that the bloodlines mentioned before are actually evil shape-shifting reptilian aliens! Now, I can't go with that stuff. But you gotta admit it's very intriguing, and entertaining. (In fact, when I first heard he was banned here I thought it was the Greens who'd demanded this on the grounds of exo-xenophobia -- hell, what if those aliens were seeking asylum on Earth? -- as well as herpetophobia.)

And his critics cite this theory as evidence that he's crazy. Which begs another question: If true, why do they find him such a threat? Nutbars are easy to debunk. Wouldn't you just jump at the chance?

This YouTube video shows a respected Beeb journo Andrew Neil and a couple of other high profile Limeys politely try to do just that. They actually find it much more of a challenge than they expected.

And crazies only appeal to other crazies, right? What genuine threat could a buncha loons ranting about lizard aliens possibly constitute to our democracy, or its citizens?

The incoherence of the OTT reaction stands out like canine testicles. They're saying he's dangerous and mean, but also a barking mad old Pom who believes we're run by fricken reptiles from outer space?

You can't have it both ways, woke-folk! Wouldn't the reasonable reaction be to put him in the harmless eccentric category and not worry about him. Hell, there are plenty of those ...

It's pretty clear that the Govt has decided to ban him to flex its muscles, so to speak. But really, it's just advertised its cowardice. There are genuinely anti-Semitic Muslims who are literal hate-preachers and activists who still get into the country. But if they target one of them they'd have the love media throwing tanties about Islamophobia, so they are generally careful not to.

And if they were genuine about combating the scourge of anti-Semitism they should look closely at the British Labour Party. It's well known that it is now chockas with fervent Jew-haters and many long time members are leaving as a result.

Surely there's a much stronger argument for banning Jeremy Corbyn et al. They have way more power to influence the masses than barmy ol' Dave!

And it's not like similar demands have not been made before. Remember the push to ban POTUS from entering the UK because he hurt so many Limey lefties' fee-fees? And there'll no doubt be massive tantrum-chucking from the usual suspects when he decides to lob in Canberra, prolly later this year.

Anyhoo, by outlawing David Icke's entry, and having their MSM muppets run the same bogus angle, whoever made the daft decision has made him waaay more famous here than he was before. And in the minds of many who are already aware of him his conspiracy theories just became a whole lot more credible.

Posted by MattHaydenAU at 2:28 PM