I was in the library at Customs House last Wednesday, and upon leaving the building late in the afternoon I was surprised to see a demonstration occurring outside. There were scores of people there to raise awareness of Falun Dafa (better known as Falun Gong).

This a multi-faceted spiritual practice that involves quigong. Its philosophy is focused on the need for truthfulness, compassion and forbearance. Sadly, the Chinese Government perceives this popular and benign movement to be a serious threat. 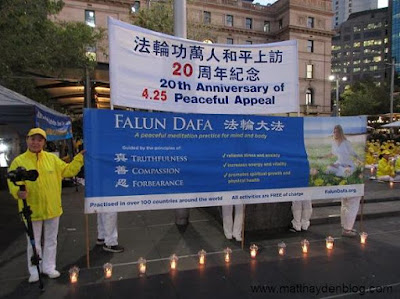 So, scores of local Falun Gong practitioners were holding a group meditation session. It was meant to give a sense of the movement's peaceful nature. 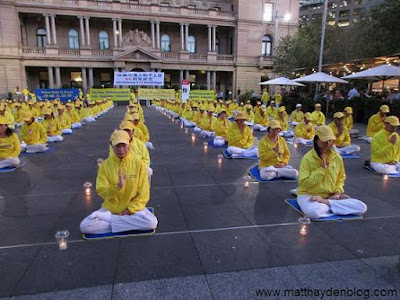 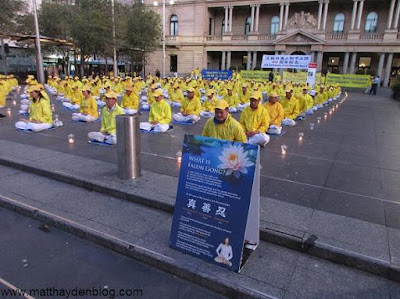 As protests go, it was so much more restrained and dignified than any of the shouty, lefty demos I've witnessed. Proves that you can make your point very effectively if you do it calmly. 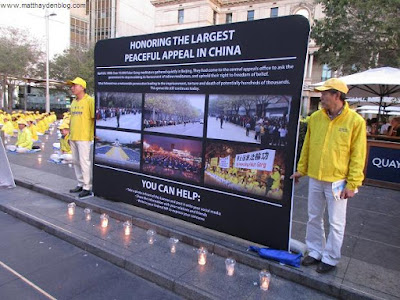 The date of the event was significant. It marked the 20th anniversary of a peaceful appeal for fair treatment in Beijing. Since then things have only gotten worse. The government has been viciously oppressing the group, with many members imprisoned and killed. There have been horror stories of them performing organ harvesting on live victims as well.

But events like this do raise international awareness about the issue which in turn builds pressure on China. Hopefully in time that nation will halt its appalling treatment of these peaceful people.

Posted by MattHaydenAU at 9:10 AM