Earlier today I had an interesting experience that I think said something about the way Zali Steggall's campaign is being run. There's a lot of talk about her links to Getup and how she's a kind of cat's paw for globalist forces who peddle warmist bollocks. I had a brief interchange with one of her supporters that seemed to confirm this narrative.

There's a bit of context to it so please bear with me as I fill that in:

See, as well as this blog, I have another one which is not to do with politics or current affairs at all. Basically, it's just a way for me to share photos of interesting landmarks, buildings, and statues in and around Sydney. I have a YouTube channel for it as well.

Now, today I had planned to make a quick video of the Lady of Commerce statue out the front of the Royal Exchange building at 56 Pitt Street. Even did a bit of research so I could include some interesting facts in my narration.

On my way there I made this short video of the Department of Lands building:


Anyhoo, a coupla minutes after doing that I got to the corner of Pitt and Bridge Sts and was surprised to see a bunch of election campaign placards out the front of 56 Pitt St as well as volunteers from the various parties handing out how to vote pamphlets, etc. They occupied the pavement in front of the statue, which put the kibosh on my original plan to do a little video about the statue itself.

Curious about why they were there weeks before election day I started talking to a Liberal Party volunteer. He told me that this was a polling place for early voting. I joked that I was one of the few conservatives in the inner west before taking one of his pamphlets and walking off.

I didn't want to waste a visit, though, and considered making a video for my more politically themed YouTube channel. During the state election recently I got this video just to give people a sense of the scene at the Newtown polling place. I was toying with the idea of doing another one like that, but decided to opt for a couple of shots instead.

I was keen to incorporate the Lady of Commerce statue because of the link between business and politics. Then I could add a smartarse caption like: "If Zali Steggall wins Warringah, let's hope she's as good for business as the grand old lady behind her. Something tells me she won't be!" (Haw, haw.) 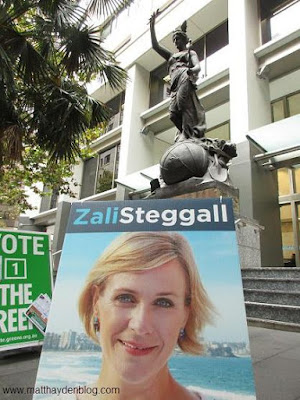 And for this one: "ScoMo spotted at the 'top end of town'. Hmm. Maybe Bill was right after all?" (Thinking emoji.) 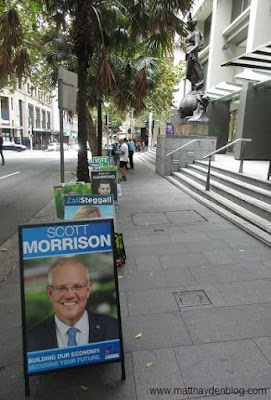 I was shuffling around for a few minutes tryna get these shots right. So I understand how it might have looked a little bit suss to the volunteers.

Anyhoo, while I was standing there looking at the photos I had taken one of the Steggall volunteers came up to me and strikes up a convo about the statue. Then he segues into the subject of the campaign itself and mentions that photos of the volunteers were not allowed.

I hadn't taken any photos specifically of the people there at all, and had no intention of doing so. I reassured him of that and said they might just end up as tiny figures in the background.

Then he told me that they'd had some trouble with Tony Abbott supporters and that the boss (whoever that was -- doubt it was Ms Steggall herself) had ordered that no photos of volunteers could be taken (or words to that effect).

I'm not quite sure what that meant. And was that something that could even be enforced? I suspect things have been getting pretty full-on in Warringah of late and the team was worried about being identified and subsequently doxxed.

In any case it struck me as pretty OTT. And BTW this is not so much a criticism of the dude who told me. He was polite and didn't seem like some jumped up narcissist throwing his weight around. He genuinely seemed to be passing on a directive from someone above him.

I told him I wouldn't be doing anything like that. To which he replied, "Well you don't look like a Tony Abbott supporter ..." This was a reference to my scruffy appearance, no doubt. I'm not exactly a Hugo Boss model on the best of days but today I prolly resembled Grizzly Adams after a three day bender. I nodded and laughed as if to agree.

I could sense he was still a tad suspicious, so I reassured him again. I said: "Don't worry, I'm just here taking photos of statues and buildings for my blog ..."

Then he walked away suddenly saying: "That doesn't sound like ..." He cut himself off in mid-sentence as he strode off so I can't be exactly sure what he meant, but what I think happened was that he concluded that I was dissembling about my reasons for being there, and that I had actually lobbed as some sorta clandestine operative for the eeevil Lord Abbott!

Quite frankly this pissed me off.

Yes I'm a conservative, and I'd prefer ScoMo over Shorten for sure. I also hope Tony wins Warringah though I'll have no effect on that result at all because I'm not in his electorate.

But I really was just there by chance, with no political motivation at all. And I'm definitely not part of any psyop for the Abbott campaign.

If that dude hadn't come up to me to suss out why I was there and -- seemingly -- disbelieved my reasons I would have just made this a general post about the impending election, with the shots and captions included above.

But now it's specifically about Zali Steggall's campaign and how it's being run.

I mean, FFS, telling your volunteers that they can't be photographed at polling places (which implies the right to deny photographers their rights to take them) seems pretty OTT and authoritarian, dunnit?

I know that the stakes are very high this election -- particularly in Warringah -- so I can understand that volunteers for all parties might be more than a tad on edge. But what I thought was interesting was that it was the Steggall volunteer who approached me, not any of the others.

Hell, there was a Greens dude there and he didn't seem perturbed. And this is the kind of behaviour you'd think would be more likely to come from them than any other party, right?

If what this guy said about being told by "the boss" that they "couldn't be photographed" was dinkum it sounds like a pretty authoritarian operation. This is at odds with Ms Steggall's repeated claims to be "independent" and seems to confirm that there's a big, bossy machine behind her calling the shots.

Now I know this is a pretty long post about something quite minor. Maybe I'm reading way too much into it.

Also, several weeks ago I was physically attacked in the street by a fricken lunatic who thought I was taking shots of him, and not the charming old cafe he was sitting in, so I do have a bit of an issue when people start telling me -- however subtly -- what I can and can't photograph in a public place. Maybe I haven't yet achieved closure over that and it's clouding my thinking, I dunno ...

Still, the episode struck me as very odd and somewhat significant given the context. Hence the post.

What do you reckon?
Posted by MattHaydenAU at 7:45 PM