Leftist radicals of the sixties and seventies claimed that their main motivation was pacifism. But they were actually hell-bent on promoting communism.

Their conservative opponents often accused them of being OTT and violent. In response to this, one of their favourite phrases was: "If you wanna make an omelette, you've gotta crack a few eggs!"

Fast forward to 2019. The more things change, etc ... Only this time, the protestors are not being metaphorical.

There was that idiot who egged Fraser Anning, and now some stupid girl has gone and done the same thing to ScoMo. Maybe she's tryna make some feminist statement, and strike a blow for gender egg-quality or something. But all she's done is show how unhinged, incoherent and violent the Left have become. 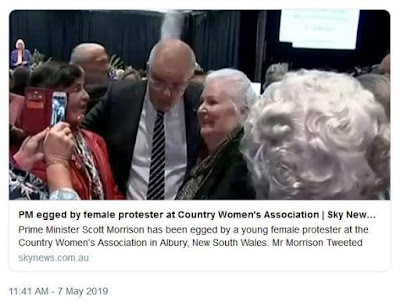 At this stage it also seems likely that she's aligned to the animal rights movement. If that's the case then her gooey stunt was even more of a sad yolk.

Hell, if she wants better treatment for "non-human persons" including chickens then she's definitely gone about it the wrong way. Throwing an egg at someone in the name of animal rights is like a human rights advocate using a small child as a weapon to beat an opponent.

As well as this incident, there have been many other truly nasty acts committed by greenies and lefties. They even killed a dog apparently! And it's just been reported that a hollowed out book with a turd in it has been left at Tony Abbott's electoral office. It included a note that read "unpopular".

Gawd. And they're tryna make him look bad? Whatever Tony Abbott has done in his life, both politically and personally, there's no way he ever did anything as repugnant as leaving a poo in a box at the office of an enemy.

But of course the hateful lefties can't see the irony. They're pushing the narrative that Abbott is such a noxious character that he provokes this kind of reaction in otherwise reasonable people. But that will only work with primitive idiots like themselves. And they would be supporting Zali Steggall or other leftie candidates anyway.

This is truly desperate stuff. I suspect it will backfire on them big-time. But if it actually does the opposite and helps lower his vote on election day then this country is in a far more dire situation than I thought.
Posted by MattHaydenAU at 12:54 PM