Dinkum Bill is a fake narrative

Predictably many lefties have been shrieking up a storm about the Daily Telegraph correcting Bill Shorten regarding what he said about his mum on Q and A. But I was surprised when Bolta condemned the story. I think that's because he knows from personal experience how much hurt relatives of public figures can feel when their family history becomes the subject of public discussion.

I can understand that. But Bill Shorten is running for the most important job in the land and an election is only days away now. Perfectly reasonable for the media to have the blowtorch on full blast when applying it to his belly!

Also, strikes me as a bit naive that he didn't expect this treatment. He's been a public figure for many years -- not just as Opposition Leader but also as one of the top dogs in Australia's cut-throat union movement.

He called the story "gotcha shit". But was it?

I don't think so at all. The issue of character is extremely important in a PM. And while it's obvious that politics often requires a flexible relationship with the truth citizens do want to know how trustworthy and genuine a candidate is at his psychological core before casting their votes. Some pollies will dissemble or even lie only as a last resort, while others are just full-on dodgy blokes who tell massive porkies as easy as breathing.

Bill Clinton is the most extreme version I can think of in the latter category. I don't think our Bill is that far gone, but he's getting there ...

And in the way he talked about his mum the other night he was clearly being selective with the truth for political purposes. While he had publicly stated that she was a lawyer at other times, that's irrelevant. On this occasion, in front of an impressionable audience, he wove what was basically a sob story about how she missed out on her ambitions in that regard.

He then invoked that emotive narrative to cast himself as a kinda Gandhi figure who was gonna give the whole nation the opportunities that his mum was so unfairly denied. It wasn't just disingenuous but bizarre. He was talking down her achievements to big note himself!

This is clear from the transcript below and even more obvious when you watch the video.

It’s as... I’m going to finish on this point. I went to this university. The reason I went to this university is ‘cause my mum worked here for 33 years. My mum came from a working-class family. She was the first in our family in the early ‘50s to ever go to university, ever. No-one ever thought... My grandma, English grandma, she was a cleaner and a barmaid. They wouldn’t have thought we’d ever be sitting here, talking to you like this. But if my mum... And she became a teacher, but she wanted to be a lawyer, but she was the eldest in the family, so needed to take the teacher scholarship to look after the rest of the kids. My mum was a brilliant woman. She wasn’t bitter. She worked here for 35 years. But I also know that if she had had other opportunities, she could have done anything.

I can’t make it right for my mum. And she wouldn’t want me to. But my point is this – what motivates me, if you really want to know who Bill Shorten is, I can’t make it right for my mum but I can make it right for everyone else. This is a country... I don’t care who you vote for – I’d like you to vote for us – I don’t care what god you worship, I don’t care how long you’ve been here, your accent, your family, what job they do, but I reckon that if this country can just let people be as talented and as capable by giving them all the same opportunity, we won’t all be the same at the end of the day, but then nothing gonna hold this country back. When we’re equal, when we get equal opportunity, we are going to be the best country in the world, with no arrogance. That’s my leadership style.

There's no doubt about what he was communicating to the audience. Yet some of his MSM supporters were in denial. Take this "journo" here: 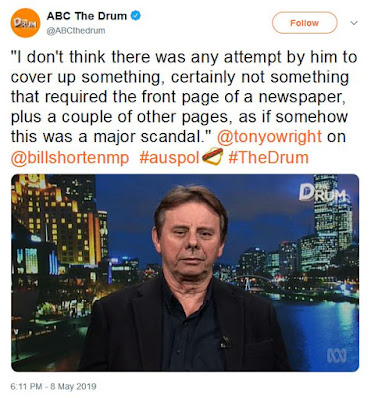 Okay, Shorten wasn't actively tryna cover it up. But he did make a glaring omission to make it seem that his mum never achieved her dreams so that he could cast himself as the bloke who, as PM, would help everyone else achieve theirs.

It was pretty damn bogus, no two ways about it! And the ease with which he promoted this fake narrative was a real worry. This aspect of his character is something a lot of people are waking up to, which is one of the main reasons the race has narrowed in recent weeks. 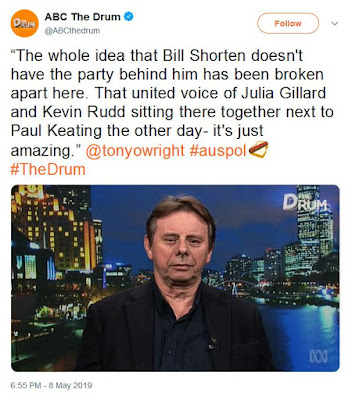 Yet this dude continued to talk Bill Shorten up, zif he's a magical uniter of old foes. But the fact that Gillard, Rudd and Keating sat together at the launch suggests something else entirely: They all know what he's really like, and they're absolutely packin' death that a big swathe of the electorate will realize this too and the election will be lost. The show of unity was a desperate attempt to stop this from happening. 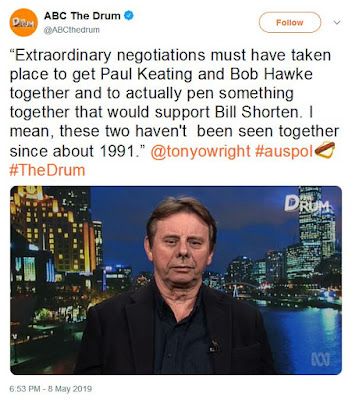 This cooperation between long time enemies Hawke and Keating is another example of just how worried they are. 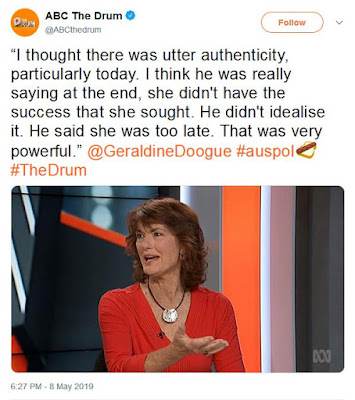 Clearly, the party is desperately pushing the line that Bill is just a really lovely caring, sharing bloke who wants the best for everyone -- no fibs! And the muppets at their ABC are doing their part, pedaling this bollocks narrative with gusto.

Does she really believe that? Seems she's being a tad disingenuous herself ... If not, well, that's just sad.

To me and I suspect a rapidly growing number of Aussies, Bill Shorten comes across as a kind of latter day Les Patterson -- though not nearly as priapic, disheveled and boozy, of course.

Posted by MattHaydenAU at 9:27 PM