The climate changes but leftie elites never do

So there have been more of these bizarre climate change rallies by kids across the globe. These are creepy and wrong on so many levels.

The extent to which kids are being brainwashed with this doom-laden bollocks is sickening. And it's not just greenies terrifying their own children. The state is actively involved in this process via the education system. Not every teacher encourages their students to take part in these demos but many of them do. And they're all expected to repeat the massive lies peddled by Al Gore and his ilk.

It would be much more professional, responsible and ultimately far better for children's mental and emotional health if they were taught what all rational and sane folk have long known: that the climate is always changing, and has been for yonks.

Yes, we're probably having some influence on it but in ways that are hard to quantify. And it's just crazy to think that we can turn the planet's temperature up and down like a thermostat -- least of all by paying more for fricken electricity!

FFS, even if warmists had a solid case their predictions should not be taught in schools. Kids should be protected from such horrifying scenarios. And the fact that it's all a yuge, global scam makes what's happening in education -- particularly in the primary and secondary levels -- even worse!

Recently I blogged about this push by warmists to turn schools into indoctrination camps. And here is some Limey activist proudly reconfirming this very point. 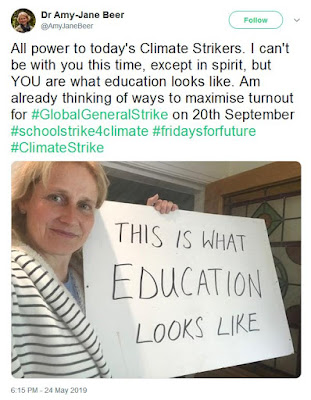 In a strange way this daft Brit is actually correct. This is what education looks like these days -- because it's been completely hijacked by Gaia-worshipping doomsayers. Needless to say it shouldn't be like this at all. Education should be about teaching kids how to think, not what to think.

And the fact that schoolteachers, of all people, now tell their students that the whole world is gonna fry unless they get out and wave placards about is just disgusting.

Traumatizing kids to push your own nasty political agenda is definitely child abuse. And influential activists and politicians like Adam Bandt are the most culpable. I hope they are held responsible and severely punished one day for what they have done.

Just look at the smug little soy boy. He's pleased as punch he's got all his minions mind-controlled. 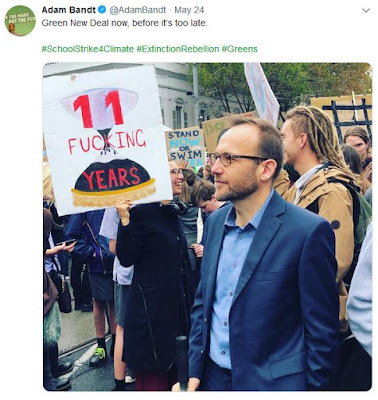 Does he believe the massive lies he's told them? Somehow, I doubt it.

If he dinkum reckons that "we're all gonna die!" because of global warming then he wouldn't be sporting such a calmly self-satisfied expression, now would he? To me, this looks much more like the face of a narcissist savouring the power he has over others.

And check out the frightbat holding the sign as she beams at the dreadlocked nature boy -- who himself appears to be grinning.

Maybe they're flirting with each other, who knows ... Whatever's actually going on it massively contradicts the sentiment expressed by her stupid sign.

Looks very much like they're just peddling this bollocks because all the other muppets around them are. But most of the kids who've been exposed to this rubbish genuinely believe what they've been told by their parents, guardians and teachers. Childhood is traumatic enough without the threat of impending global catastrophe to worry about!

I really feel sorry for them. It's very different to what I went through as a child during the Cold War. And that was a time when there was a genuine possibility that the world was gonna end ...