Why Hollywood is full of deviled hams

Back in the day I used to do standup and character comedy. So I would hang out with comics, actors, musos and other arty wankers. There was a lot of high-minded talk about freedom of expression, creativity and all the rest of it. But it slowly dawned on me that rather than being individualist free thinkers this crowd were generally very conformist in their political views.

By the late nineties I'd concluded that most of the people I knew -- while being very personable individuals -- were brainwashed by political correctness and deep green mania. I used to think of the most fervent greenies as religious in their zeal and jokingly referred to them as "ferndamentalists".

Occasionally I took the piss out of them in gigs, though there was a trick to doing that. You couldn't just go "balls out". The best approach was to sandwich your subversive "right-wing" gags in between more traditional fare mocking popular culture (eg TV shows) and pollies generally. If you showed complete and consistent disdain for the Left the audience may have gone with it, but the denizens of the comedy scene sure as hell wouldn't have. You'd be marking yourself as an ideological enemy and the gigs would slowly dry up for sure.

Needless to say having to self-censor was very depressing. It was the main reason I pretty much gave up comedy, only performing very occasionally. Haven't done a gig for many years now.

Like all sane adults stuck in a leftist dominated milieux I found the ideological conformity deeply frustrating and the strange fervour these folk had for their causes -- feminist and green ones especially -- weird and a bit unsettling. They were daft, but dark; right on the cusp between silly and sinister -- sillister, for short! At the time I had a couple of lines on this particular subject that I wanted to try out but don't think I ever did. That's because they weren't actual jokes with strong, sure-fire punchlines, obviously a crucial ingredient in any comedy routine.

The first was to describe these sillister folk as being trapped "in the belly of the Beast -- but they think it's an indoor swimming pool." The other was about how ironic it was that they hated Christians so much. After all, their whole world view seemed to be ripped off from the Bible. "It's just like the Garden of Eden except this time the serpent is the good guy!"

The reason I cite these two observations now is that at the time I didn't actually believe they dinkum worshipped the devil (and I still don't). I just thought they were so extreme in their views that they'd done a sort of spiritual about face and Luciferian imagery was the best thing I could think of to convey the concept.

But now, twenty years on, I realize that I was actually onto something ...

The PC Left, particularly in America, have long been virulently anti-Christian because so much of what they see as bad, wrong and oppressive (like the traditional family, gender roles, etc) is promoted by the Church. If they can destroy its power, they are that much closer to implementing their creepy totalitarian agenda.

While most of these folk are just garden variety atheists, some of them are genuine Satan worshippers. They don't advertise that fact, of course. Occult power thrives in the dark, after all. Exposure is its kryptonite ... Hell, if you thought the Lord worked in mysterious ways, you should get a load of his nemesis! The Prince of Darkness is the "father of lies" and is always dissembling.

While these deluded control freaks are found throughout the upper echelons of politics, business and other fields they are extremely powerful in Hollywood.

And their influence is obvious. So much of what the joint produces is not just atheistic, but deeply anti-Christian. Can you even think of major studio flick since, say, Ben Hur that had a clear pro-Christian theme? The only one that comes to my mind in recent years is The Passion of the Christ. And think of how controversial that was ...

As well as the anti-Christian subtext of so much popular culture in the West -- which as we all know is completely dominated by Hollywood -- there's been an overt obsession with sprucing up Old Nick's image of late.

The above doco is just one example. Think of all the dark movies and series that have come out lately in which "evil" characters are the actual protagonists; the ones the audience are meant to identify with and not the bad guys who must be defeated. 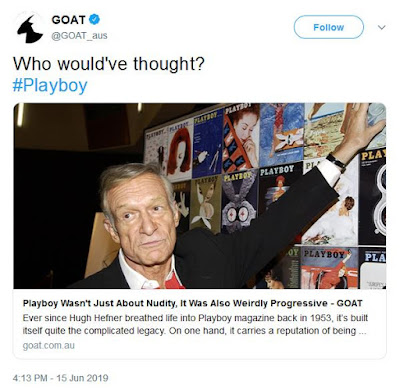 There's also heaps of occult imagery in the MSM these days: goats, pentagrams, and the like. And it's everywhere, even in Oz.

Take the new online publication tweeted above. I first saw it advertised slickly (and expensively) in a video in a city train station. I thought the goat symbol was very odd, especially for Australia. Wouldn't quolls, numbats or bilbies be the go? And how did it get the obvious loads of money behind it? If you check it out you'll see it's chockas with sleb-centric fake news. Call me a parochial puritan if you like, but I smell globalist sulfur ...

So what's going on here? Looks to me like a massive, international, long term, stealth campaign by the occult elite to instill their dark narratives in our consciousness.

The vast majority of cultural content producers aren't overt devil worshippers, of course. But they are slowly but surely being fed satanic symbolism from on high and rewarded for promoting it.

Watch the video below and tell me there isn't something seriously creepy and wrong going on -- and right under our noses!
If you've enjoyed this post, please consider supporting me via Ko-fi.