Many people noticed the bizarre response to the horrific Sri Lanka attacks from many high profile Democrats and their supporters. Instead of describing the victims accurately as Christians, they called them "Easter worshippers".

You often see politically correct terms like this being used these days. They are clearly part of a wider leftist effort to diminish the power and influence of Christianity. (There's a great book on this subject by David Horowitz, BTW. He's a former leftist radical so he knows all about just how mean and crazy these scumbag zealots actually are. It's called Dark Agenda.)

As with so much behaviour from the PC Left it was sinister in several ways. There was the robotic replication of the phrase in nearly simultaneous tweets, for example. It's as if they had all actually received a memo telling them to use that particular phrase. And that was almost certainly the case.

If you've been following the whole Q phenomenon you'll know how the Deep State sends out preferred talking points to politicians and fake news outlets like CNN before dawn. That's why you see so many similar MSM stories appearing at the same time, sometimes with near identical headlines. (One of the popular recent targets has been the Q "conspiracy theory" itself, with scores of hit pieces claiming it had been debunked when the opposite is clearly the case.)

This spate of "Easter worshippers" tweets from several Democrats including Obama and Hillary was another example of that, or something very similar. 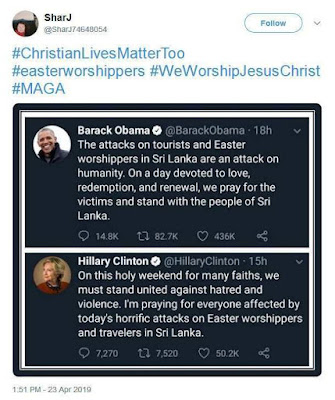 Now, a lot of people think that big name "liberals" will use a term like this because they can't bring themselves to say "Christian" and that it's an unconscious omission, kinda like a Freudian slip. Well, I'm sure they find saying or writing it unpleasant. But I suspect they are fully aware of what they are doing when they choose to use a replacement term like this. And they know how offensive it is to Christians themselves. That's exactly why they do it, IMO.

I suspect this is also why Hillary said in the tweet that she was "praying" for the victims. She has long purported to worship God. But if rumours are true this is a facade not unlike her marriage to Bill. It seems she "bats for the other side" in more ways than one ...

These are deeply mean-spirited people. They are into gaslighting. They do this because they find it pleasurable. It can also be highly demoralizing to their opponents.

I don't think it's nearly as effective in this regard as it used to be, however. That's because gaslighting as a form of soul destruction only works if you have total control of the narrative that your target audience believes.

Then you can rename -- or flat out omit to mention -- a particular faith or specific belief and leave its followers confused as to why that would be the case. Without an alternative explanation, these people would think maybe they were the ones who were going mad.

But that is definitely not the case these days. The MSM has lost much of its credibility in the eyes of most Americans and even many Aussies. Other, more reliable sources of news are now online and being shared like crazy on social media. The truth will set you free, as the biblical saying goes. It also fills you with confidence borne of conviction.

So, cruel little touches like saying "Easter worshippers" no longer have the same power to unsettle, confuse and thereby erode the faith of believers. They actually do the opposite.

We are all onto these disgusting people and their sick mind games. Their psychological power over all of us -- atheists such as myself included -- is waning inexorably.

The murderous hatred that motivated the Sri Lanka attacks continues, sadly. But the fact that the globalist PC Left gets less mileage out of them is certainly a heartening development.
Posted by MattHaydenAU at 9:49 AM