If you're in Australia, odds are you'll know about the massive police crackdown on that planned anti-lockdown protest in Sydney on Saturday, July 31st. The mainstream media have been saying that having over 1000 coppers all over the joint prevented the assembly of countless eeevil superspreading conspiracy theorists. They saved lives for sure!

But from what I could tell there wasn't even a demo planned.

I'm not an activist type myself. Getting shouty with a placard is not my style. But I have lobbed at a couple of rallies to get footage of them. And I follow many thousands of people on Twitter and other social media sites. If something is in the works, I'll know about it. As well as numerous tweets about it, there will usually be some kind of online poster that is shared with details of when and where the rally will be held.

There was nothing like that this time. I saw one Twitter interchange referring to "the demo tomorrow" or words to that effect. But that didn't mention any specific location or time. That was it.

In any case, I missed the last one, which as we all know was absolutely yuge! So I thought that if one was to somehow magically appear I would get some photos and clips of it. I was going into the city to do some shopping anyhow. 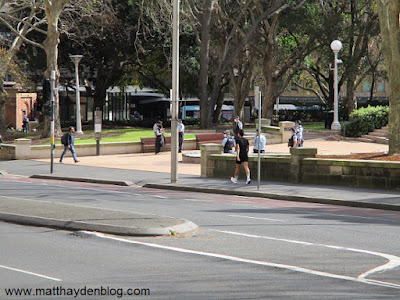 Having caught the rail bus in, I got off at Central Station, which was of course chockas with cops. So too was Hyde Park. Above is the entrance to the Anzac Memorial. Talk about trashing the memory of those fallen soldiers. Didn't they fight and die for freedoms including the right to free speech, which the NSW Government was now so brutally suppressing? 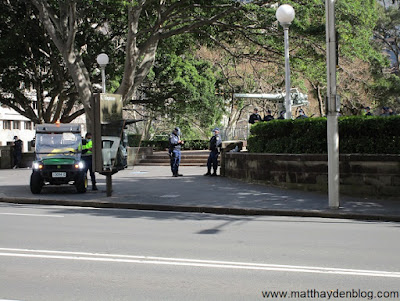 There were plenty of coppers under the Emden Gun. Ironic, because the whole CBD was basically under theirs. (BTW, that seems to be something that really excites the creepy globalist occultists at the Daily Telegraph.) 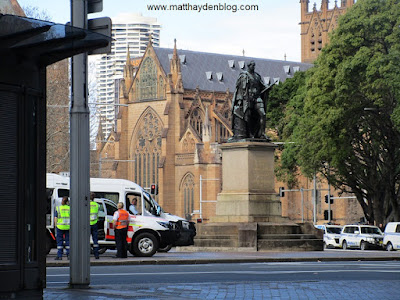 This shot was taken from Macquarie Street, looking towards St Mary's Cathedral. As well as heaps of police cars, there were also several ambulances at the ready. 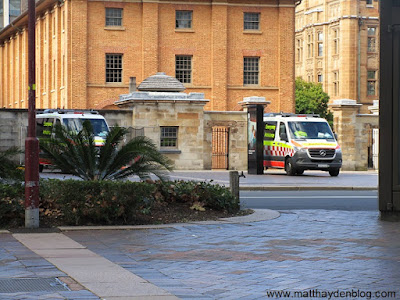 Was this for the imaginary protesters clubbed by the cobbers, or for the plods themselves who'd got the jibby-jab-jabberwocky-jabberoo, and were therefore likely to keel over from blood clots after too much exertion? Who knows ... 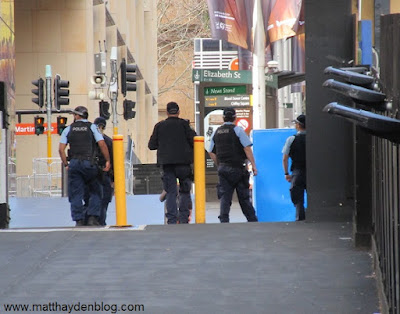 There were heaps of teams like the one above striding through the city. This photo doesn't quite capture it, but they certainly weren't social distancing. 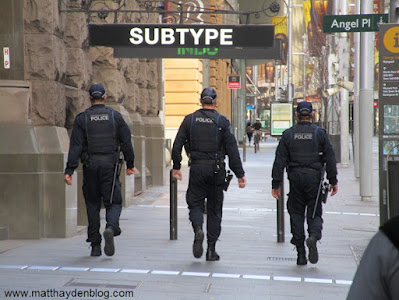 Not sure of the exact name of this subtype. But I think they're the riot police. This was on George Street, near the corner of Martin Place. As you can see, they were carrying bloody big truncheons and guns. Well, you can't be too careful around those eeevil anti-vaxxer grannie hippies from Byron Bay, can you? Why they're more dangerous than ISIS, aren't they!

Clearly that ginormous plod crackdown on the protest that wasn't actually planned was a yuge own goal. Whatever happened to "keeping your powder dry"? Instead, they did much loud threatening, swaggered around en masse on the day, then crowed about it afterwards.

It was all theatre, obviously. Collectively they were like a gorilla preemptively beating his chest in a jungle clearing to scare off the (absent) rival ape he feared. It just proved how thick and frightened their controllers were.

Maybe the Gladys Kevorkian Goon Squad's primitive display of strength did scare some normies into thoughtless obedience, increasing the odds they'll line up for "vaccination" (which is clearly what this was all really about ultimately). But I think their mass machismo show actually woke up a far greater number.

So, they actually achieved what the (non-existent) protesters were aiming for: awareness that the NSW Government's lockdown is fascist in the truest sense of the word. What could be more totalitarian than deploying over 1000 armed coppers to police thin air?

It was more persuasive in that regard than if the cops had bashed protesters at a real demo, I reckon. MSM Ken and Barbies claimed that the absurd plodfest was a good look, natch. But IMO the exact opposite was the case. Those many awoken by it may not lob at the next demo. But they'll avoid the jabs too, when they prolly would've had 'em before.

One of NSW's top plods reckoned the balls out, dick swinging pantomime stopped a potential "mass seeding event". Nah. It was a mass seeding event. That is, it seeded the idea in countless normie minds that the globalist controlled NSW Government has been committing titanic medical fraud and using their brutal lockdown as extortion to push all of us into being jab rats.

So, well done Gladys Kevorkian, Health Hazzard, and Fuller BS! Get your dopey army to give you (and themselves) seeding fines. Then knock yourselves out with your own truncheons, you hopeless clowns ...

Oh, and don't forget to get the "jab" yourselves (and for real, not a placebo). We'll all see how that works out for ya!

Posted by MattHaydenAU at 2:54 PM