Is an abrupt halt planned for ScoMo before the big day in May?

I'm seeing many strange elements in MSM reports that make me think there's gonna be some sort of jaw-dropping false flag before, during or after the upcoming federal election.

For context, please check out these posts about how weird ScoMo's notorious performance of "April Sun in Cuba" was, along with subsequent references to it.

If the PM suddenly exits the scene for some reason or another it certainly won't be a first. There was the mysterious case of Harold Holt, remember. And there are many intriguing theories about what the real story behind his disappearance was, including that the CIA were involved.

Whatever's really happening in Canberra there's no doubt that the MSM are lying to us about it on a grand scale. Which is why I think it's worth speculating in the way I'm doing now.

And my spidey senses are telling me that the big battle between ScoMo and Albo is all for show. The result has already been decided by TPTB. I'm not sure there will even be an election, TBH!

I think something absolutely yuge may well be on the cards. It might even involve some sort of fake assassination attempt. To say why here are a coupla intriguing data points (and I've seen many more).

Firstly, take this tweet from Sky News, which has form for occult elite symbolism and comms. 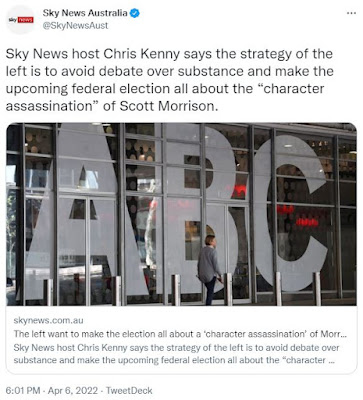 Note how the word "assassination" is highlighted. And look at the photo they've chosen. There are streaks of red in it that are quite striking. A hint that maybe the Deep State has something more seemingly visceral in the works?

Then there's this cover of the Failing Terrorgraph. It was just after the obvious fake fight performed by two Cabal puppets. The story below that item alluded to a James Bond movie. 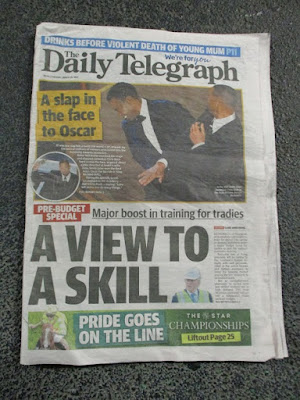 As well as the obvious wordplay on "kill" there were other notable elements. For example ScoMo was shown in a safety jacket with a helmet on, suggesting danger. 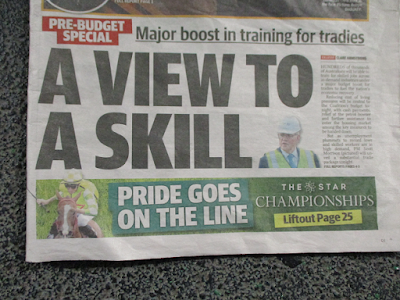 Directly below the headline there was an ad for a liftout about an upcoming horse race. They often use these symbolically for various reasons I won't go into now.

I think this was relevant because "pride goes before a fall". And the Bond movie itself had many aspects related to horse racing and breeding.

Something I think was really notable was that it starred Grace Jones. She, like the two actors in the story above, is black. In the movie she indulges in some spirited sparring, not unlike Will Smith did at the Oscars.

Guess what her character's name was? May Day.

When's the election being held? On a day in May.

If I am correct and something big is in the works, odds are it won't be real. In keeping with the symbolism described above, we will all be "watching a movie", I reckon.

But if the Cabal actually do decide to take the PM out for real, and in a style reminiscent of Harold Holt, then the movie contains a good tip on how he can survive from 007 himself!

Posted by MattHaydenAU at 1:19 PM