With the MSM being so corrupt, it's hard to know what to believe about anything these days. Take Hillary Clinton. There are various rumours that she is either already behind bars, or maybe even pushing up daisies. Some truthers claim she's alive but that the SOC (Self Organizing Collective) has control of her online accounts including social media.

But let's assume that the mainstream media aren't lying for once and she's still alive and tweeting. In that case her "Happy Easter" on Twitter was intriguing as. 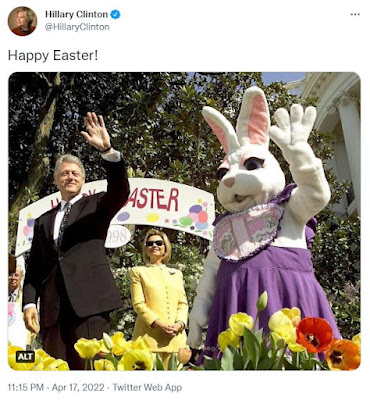 Such a strange photo. Why would she use such an old one, with her in Bill's shadow?

Look at the sign above her head. The "e" in Easter is obscured by hubby's arm, making it read "Aster".

We know that she and other members of the globalist elite detest Christians, preferring to call them "Easter worshippers".

So maybe this was a shoutout to those who worship Aster instead?

If you look up the definition of that word you'll see that among other things it's a kind of flower. And it's pinky-purple, not unlike that drug I've been blogging about. 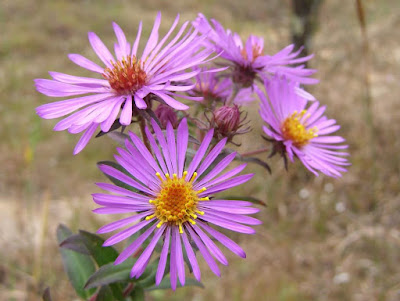 The white rabbit is another symbol of it. And there's one in the photo. Not surprising given the context, but still ... The big bunny is wearing purple, too.

OTOH, it looks likely that the trade in this notorious substance is in great upheaval, with bad batches wreaking havoc among elites across the globe.

Given this likely context, I'm thinking the theory about white hats controlling her social media accounts might be correct after all. If that's the case this is God-tier trolling. And they do have form for that.

Remember the bizarre, phallus-like route taken by that massive Evergreen container ship before it ran aground in the Suez Canal? This episode is now known as the "biggest red pill Evergiven".

Maybe this was a really bitter one made just for the Cabal?

Posted by MattHaydenAU at 2:06 PM