Cops and fireys indulge in Masonic mockery with funny bunnies

If you haven't realized the extent to which institutions, government and the media are controlled by secret society wankers this update from Victoria Police may yet convince you. The tone is meant to be charming and cheeky. But given all the fascist crap that the plods have helped the Goblin of the South inflict on Victorians, it's just plain creepy and wrong.

The commanding heights of that organization, like so many, are chockas with high-ranking Freemasons. They do dinkum worship Lucifer -- the "bringer of light" -- so they love to make references to him when they can. They're usually not as obvious as this, but.

I suspect they've been given some sort of order from on high to do this kind of thing over Easter. While most normies would prolly just think it was a bit weird, devout Christians would surely be upset by it during one of the holiest times of the year. Which was the whole point. 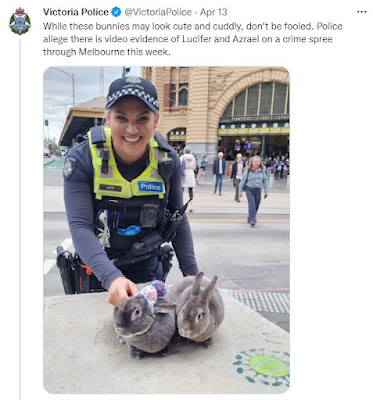 Note the jokes about the "small brown pellets". Is this related to the comms campaign that I have speculated may be in operation now? Possibly.

The thread contains an alliterative joke about "market manipulation". You often see this "double m" phenomenon related to the occult elite. I suspect it's something to do with "master mason". 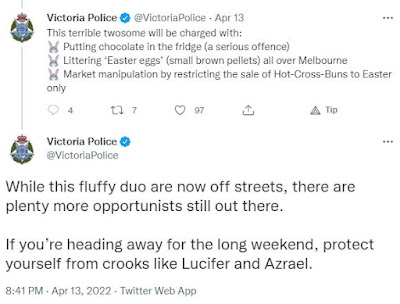 That thread was posted on April 13. And this report about a fire in Belmore in which one cute bunny rabbit was immolated and one was saved appeared in the Failing Terrorgraph on the 15th.
While I don't doubt the fire was real, it was clearly another "wag the dog" act (or rather, the ear flopping the bunny). How many people own rabbits -- and white ones at that? Then to have a fire break out on the 14th, so that it would be in the papers on Good Friday?
As Joe Biden would say: "Come on man!" 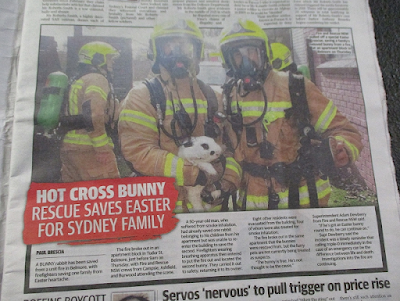 Note the mention of heartache in the "reporting". You see that all the time now. It's likely an allusion to blood as is the use of red and white in the headline. 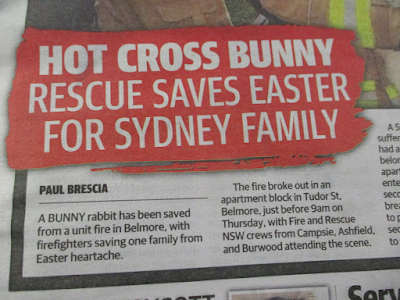 In the article a FRNSW superintendent is quoted.

The fire broke out in the same apartment that the bunnies were rescued from, but the furry pets are not currently being treated as suspects.
"The bunny is free. He is not thought to be the cause."
Creepily similar to the Victoria Police Twitter thread, innit?
That's because the fireys got the same memo as the coppers from some major creep high up on the greasy obelisk.
The idea that this fire just broke out randomly is absolute bollocks. If you believe that you're a complete moron and there's no hope for you.
Not sure exactly how it was done. But it was clearly engineered to produce the symbol-rich story in the papers on the Christian holy day.
Think how corrupt these big organizations must be with so many of these sneaky arseholes at the helm. They ultimately control all the MSM outlets as well, which is why they promoted the sick occultist joke without question.
FFS, if you were a real journo interested in discovering the truth you would surely find the whole thing suss as, then do some investigation into how it was engineered. Saying it just "broke out" is laughable given the clear symbolism and timing.
The fact that the MSM would publish and broadcast such obvious fake news shows how much contempt they have for their readers, viewers and listeners. Thankfully more and more people are waking up to this.
Please check out the video below about another recent fire in Sydney that looks very suss and in a similar way.
If you appreciate these posts, please consider supporting me via Ko-fi. Aussies, know your rights!
Posted by MattHaydenAU at 2:12 PM