Why is Bruce Willis really out of action?

Pretty obvious that the MSM publishes flat out lies quite often. That applies to general news (look at their Ukraine "reporting") but it's far worse when it comes to the world of celebrity and entertainment. That's one of the reasons the narrative about Bruce Willis retiring solely due to aphasia doesn't convince me.

There are many data points that suggest that if he is so unwell that he'll never make another movie -- least of all an action one -- then it's not aphasia that's the main reason. Not only that, he might even be in the big house.

Look at this report from the April 8 issue of the Failing Terrorgraph. Note his orange jacket, which they draw attention to in the article. 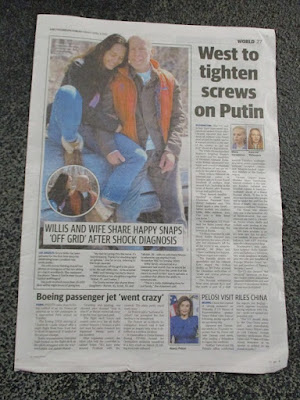 Look at the headline for the story next to it. Screws are another name for security guards in prison. Anyone who's watched classic Aussie soapie Prisoner would know that.

They also describe how he's so happy to be "off grid". What does that mean specifically?

As well as the surface meaning related to electricity and communications, there's the specific term sentencing grid. And the general definition brings to mind bars and mesh. 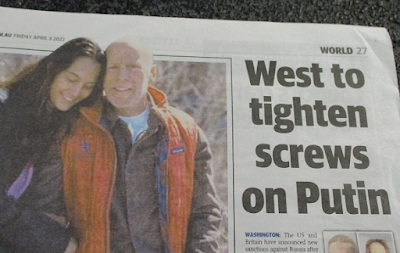 There was this story from April 1. As well as the context of the date, there are a couple of interdasting aspects to it. 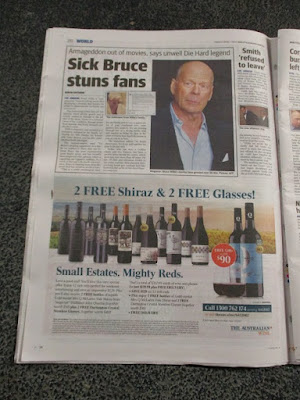 The headline reads "Armageddon out of movies". Clever wordplay of course. But often when they make a film reference it contains a deeper meaning. 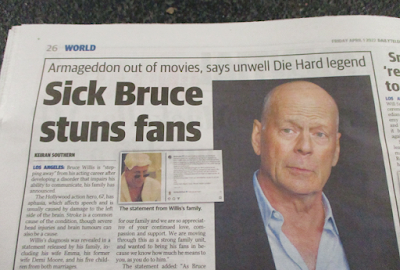 Doing an image search is usually a good idea.

Look what comes up. Orange again ... 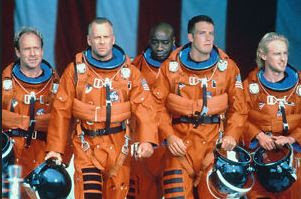 I also think it's notable that as well as calling him unwell they say "sick Bruce". That's a funny way to describe someone with aphasia. It's more of a condition than a sickness, innit?

So why use that word? Well, you get sick when you eat or drink something that disagrees with you. That's why the ad directly below the story is relevant.

They have used these particular wine ads as a way to allude to the pink drug that dare not speak its name. I explain how in this video I made when I first realized that it was a real thing.

Look at how the two bottles have blue labels. They actually echo the light and dark blue that Willis is wearing directly above. That's a heads up to those in the know to take note of this.

Look at the letter on the bottle. Why, it's the seventeenth! What are the odds? 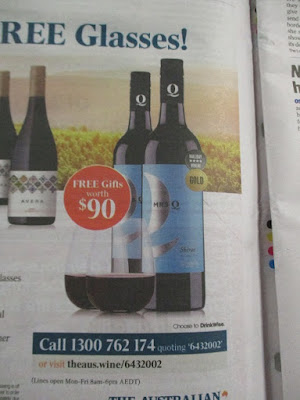 Could this be a reference to a certain project that many "conspiracy theorists" believe a special team close to Trump -- which the MSM say doesn't even exist -- has been running in the shadows?

There's a fascinating theory that these "white hats" have somehow tainted the global supply of this notorious substance, which is why many high profile movers and shakers are keeling over or bowing out.

So the page described above might be some kinda hint from the occultist flogs at that shitty Sydney lie factory that this was done to the contents of Mr Willis's own "wine" collection and that's why he's now sick, and/or wearing orange ...

OTOH, maybe it's because the team around Mysterious Mr Seventeen is now running all the MSM here from on high, and trolling the crap out of the Cabal?

Who knows, but I don't think it's entirely beyond the bounds of possibility that either of those scenarios is currently unfolding. 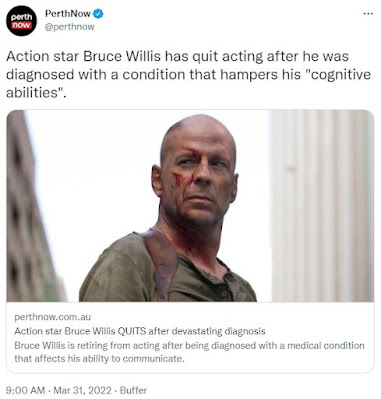 We know the secret society wankers love their eye symbolism. And they've chosen to include a shot in which one of Bruce's peepers is surrounded by blood from cuts. 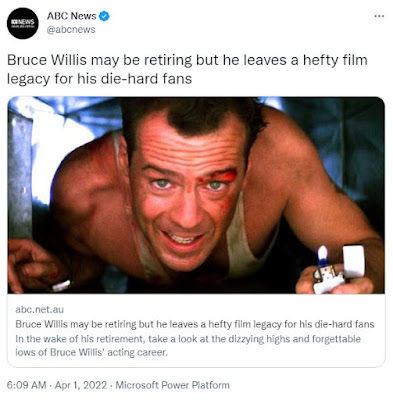 Their ABC has done something similar with their update. Instead of the right eye, it's the left one. So apt from a bunch of commies!

Note also the mention of "dizzying highs". That term is used to describe the effect of drugs, innit?

Sure, there's heaps of speculation here, as usual. But I think my take on it is prolly closer to the truth than the line the MSM are feeding the normies, whom they so obviously despise. They know what's really behind the retirement of the A-list Hollywood star. They're just not telling us.

Speaking of hidden truths please check out my video about Shane Warne and why he became such a massive sleb. Some of what I've described here may be relevant to his untimely passing as well, I reckon.

If you appreciate these post, please consider supporting me via Ko-fi. Aussies, know your rights!

Posted by MattHaydenAU at 1:43 PM