I've written before about how Sky News seems to drop a lot of occult elite symbolism into their Twitter feed. In this post I'll list some more data points related to that phenomenon.

Lately I've noticed a helluva lot of imagery to do with with red, white and pink in the MSM. Most of it is 'rona related, too.

Crazy as it seems, I think this has something to do with a vast hidden trade related to blood which produces a drug favoured by the elites. It is reputed to be pink in colour.

I believe that this is extremely important to the globalists at the very apex of the power pyramid. Hence the colour symbolism. Even though their minions far below them may not be aware of its meaning, they still dutifully repeat the motif on their platforms.

Check out these screenshots that I took after scrolling down through the feed recently. I did this all in one session. Didn't take me that long because they were all pretty close together. Note the time stamps on each and you'll see what I mean.

There were plenty more I could have included, but these will give you an idea of the clear pattern. 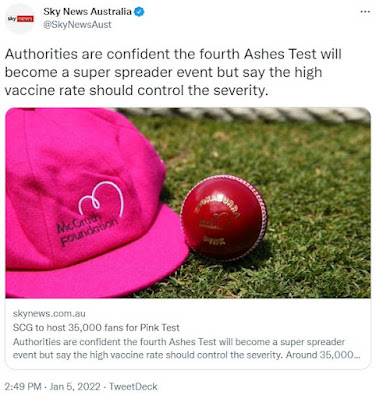 This is about the Pink Test, a regular sporting event held to raise funds for breast cancer research. Notice the red and white of the ball, and the pink hat. Red and white combined creates pink, remember. 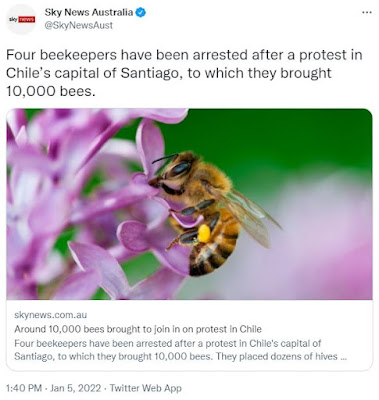 Flowers have been everywhere in the MSM lately as well. I've seen so many photos of women in news stories wearing floral dresses -- mostly pinky-purple in colour -- that it cannot be due to chance.

Just on the image above: Bees harvest nectar from flowers, and create honey from it. 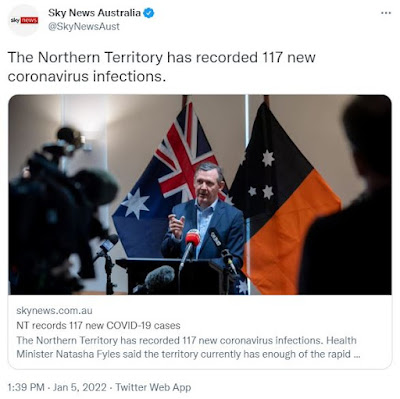 Note the position of the flag. The red and white part of it is directly behind the fascist flog's fugly face. You see that kind of thing a lot. 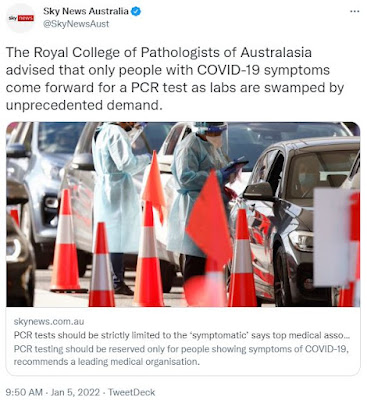 Fake news lie factories like Sky News keep using photos of people getting tested because it's one of the few ways they can make it seem like there's a real health emergency. And they often have these orange and white witches' hats in the shot. Not quite red and white. Still close, but.

Also, witches cast spells. That's what the occultists are doing all the time with their fake news. Perhaps that's why they're so fond of including them? 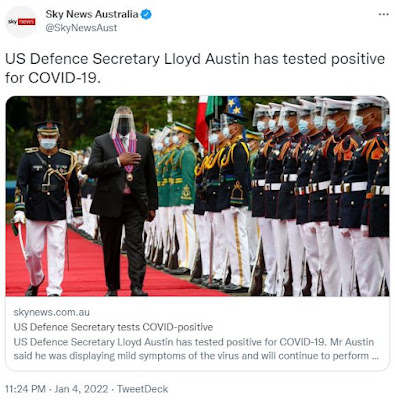 Still on the 'rona theme. Notice the red carpet and the white trousers of the soldiers. 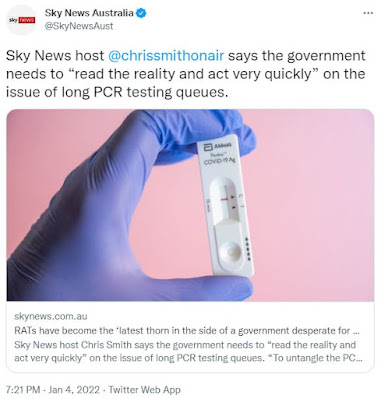 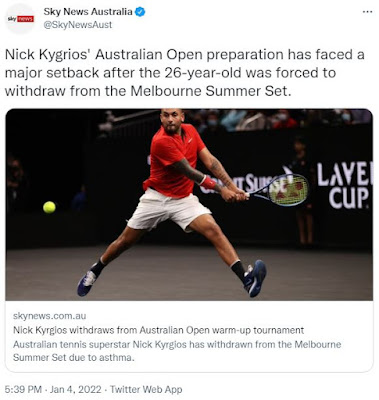 No-vaxx Novak is of course the biggest story going right now. So it's interesting that they ran this item on a local star's asthma-related pullout. Note the red shirt and white shorts. 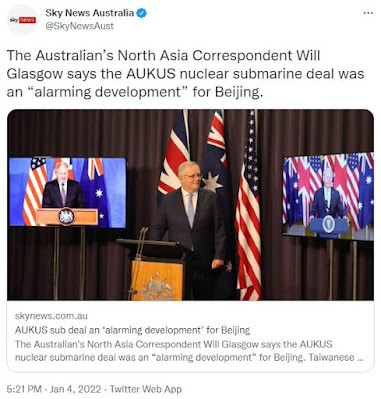 This is what I mentioned above. The red and white is directly behind ScoMo's repellent smirking boat. 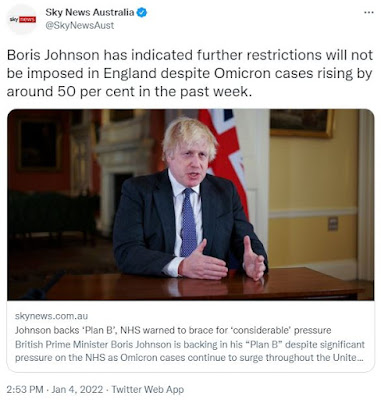 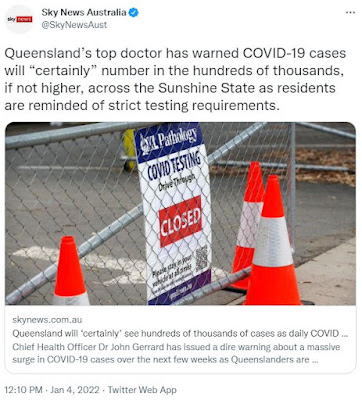 More witches' hats. And note the red and white of the sign. 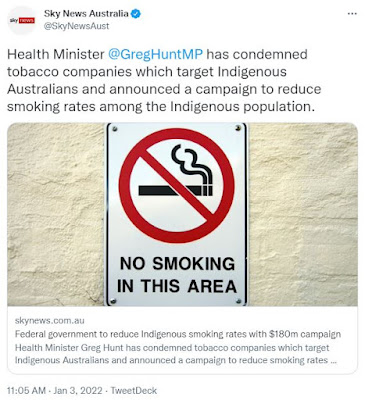 Another public health story. Why not have a shot of the Zombie Squirrel himself tryna look like he knows what he's talking about, or some Indigenous dude with a durrie hanging out of his mouth? Instead, they chose a sign. 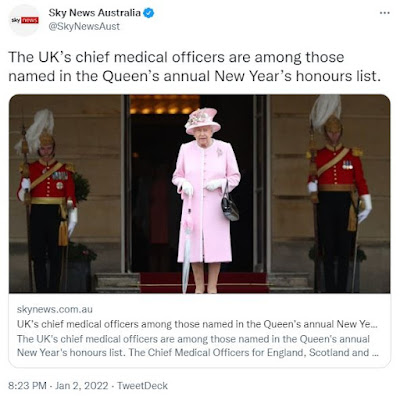 Betty Windsor in a pink dress. There's a lot more I'd like to say about images like this. I will do so in a blog post if I find time. 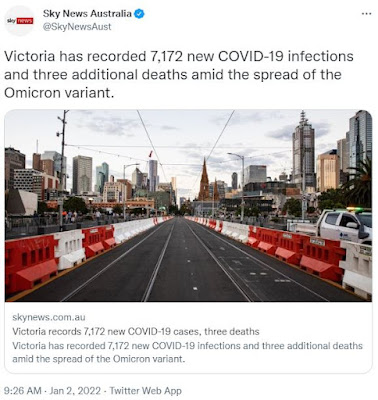 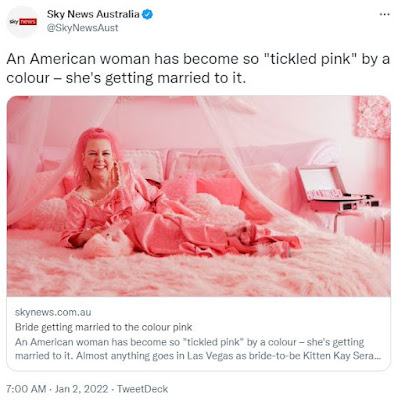 This is not related to the Pink Test. So why did they include it? 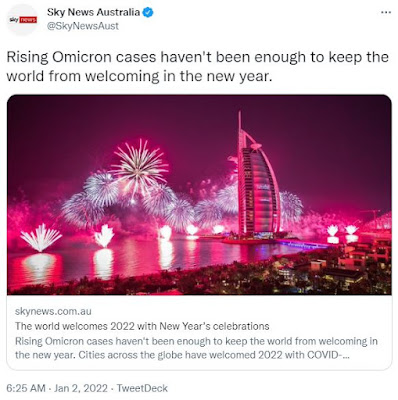 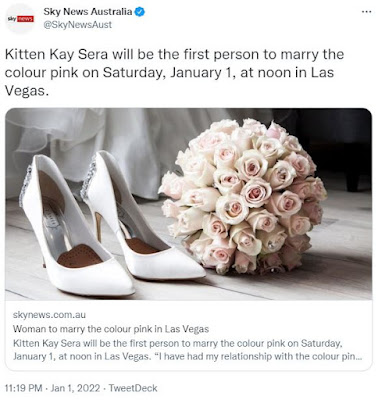 This is a precursor to the piece above. Notice the flowers. Shoes are featured also. Whenever you see those, it's likely that secret society wankers are involved, sending signals to each other and savouring their feelings of superiority over the audience being none the wiser. 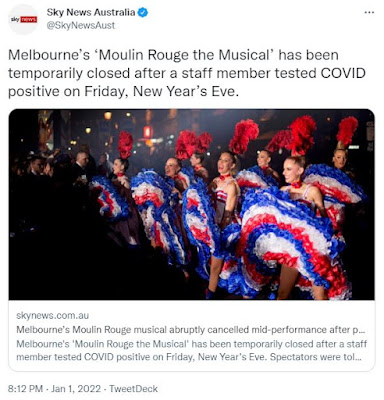 Another post with a COVID angle. Look at the dresses.

And Moulin Rouge literally means "red mill". A mill is where harvested wheat is turned into flour. So symbolically it's a bit like the bee shot above. 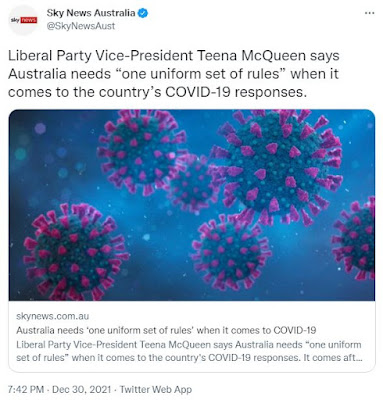 We all know the spiky Nerf ball. It's usually monochromatic. But this one's different with those pretty pink spikes. 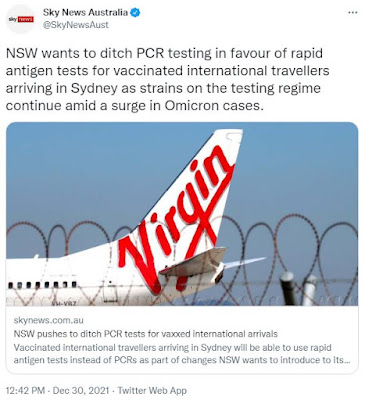 This is a PCR testing story and it's about airlines. Plenty of big carriers to choose from. So why this one?

Remember that Richard Branson is a major globalist player and even has his own private island not far from Little St James, otherwise known as Epstein Island. 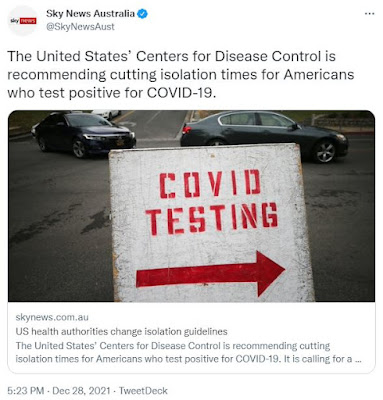 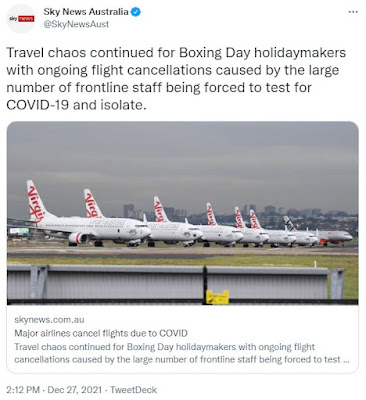 Again, a general air travel story with a 'rona twist. So why all the Virgins lined up on the runway? 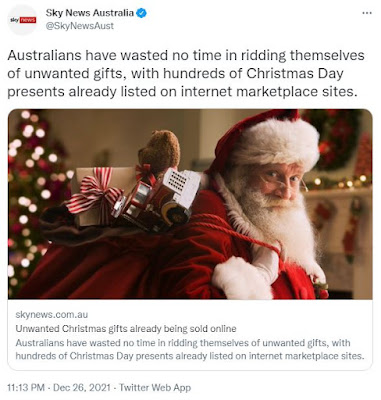 Santa's suit is red and white anyway. So, nothing unusual there.

But notice the bow on the box. And the truck itself.

Was the photo chosen to echo the theme? Maybe. 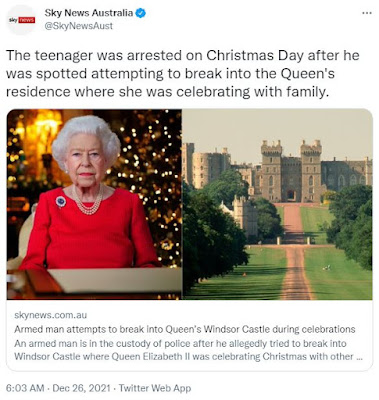 As well as symbolising blood, "code red" means danger. And that's what the Queen seemed to be in with that maniac on the castle grounds ... 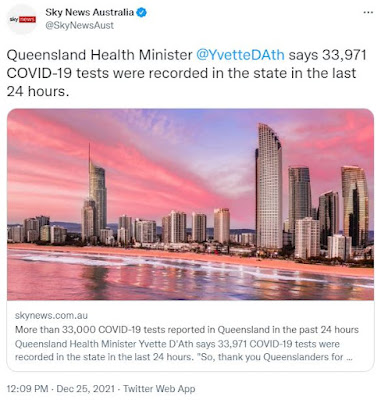 Another 'rona related story. This time it's about Queensland.

Strange choice of photo because those iconic beachside skyscrapers are usually shown with brilliant blue sky behind them. So why all the pink? 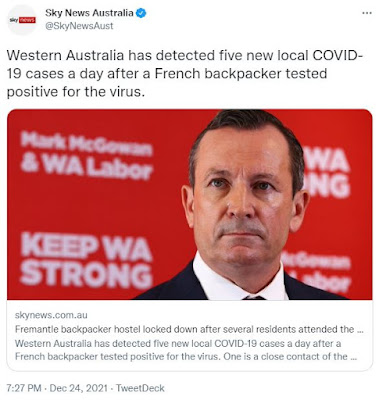 SkidMark McKaren looking like a stunned mullet as usual. Notice the background.

The alleged "patient zero" in WA was a backpacker. Over here, Noah's Backpackers was the site of an Omicron outbreak. It was the third time for the hostel, apparently. What are the odds? 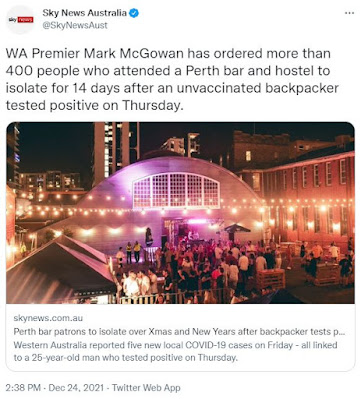 This was where the backpacker was supposed to have spread the bug. Notice the pinky-purple light. (There's also a lot of gold. That's something else I've seen a lot of in Sky News and elsewhere.) 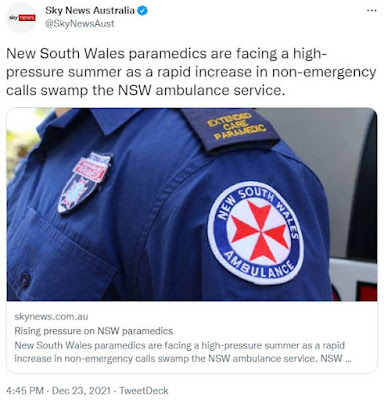 A "high pressure summer". Hmm. Interdasting phrase given the context and focus on the symbol on his uniform. Brings to mind "blood pressure", dunnit? 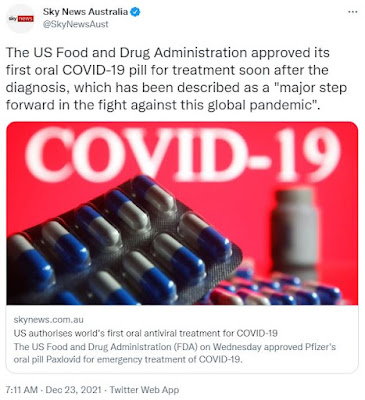 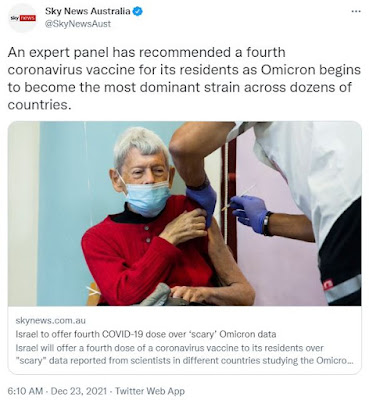 Finally this from fully jabbed, 'rona-ravaged Israel. The woman wears a striking red dress, not unlike Betty above.

I could go on and on. But you get the drift. 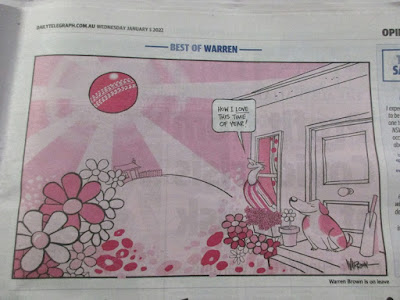 The same strong trend was also in evidence in the Failing Terrorgraph. Take this toon from January 5, which echoes the very first screen shot above.

As well as the pink flowers, look at the rays shooting out from the celestial cricket ball. This is reminiscent of the Masonic "blazing star". Not surprisingly there's a dog included -- which can't be blue this time, obviously.

Look at how the dude is on a high from inhaling the pink air. Why, it's almost like a drug, innit?