I've blogged previously about how the occult elite does a lot of "hiding in plain sight". They seem to do it for various reasons -- one of them being that if they tell us normies what they're up to and we do nothing, then it's our fault.

Well, here are a couple of examples from the Failing Terrorgraph. There's a lot of stuff in this sinister lie factory that has a creepy rock spider vibe. It also seems to include many subtle, approving references to child trafficking. These cases are in that category. 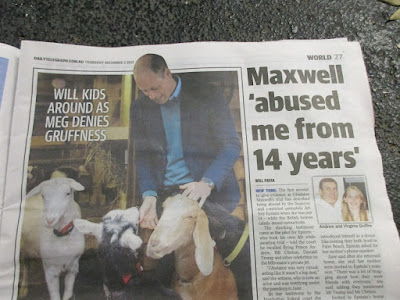 This was a page in the December 2 issue. As you can see, there's an update about the Ghislaine Maxwell case. It includes that well known photo of Prince Andrew and Virginia Giuffre.

Right next to it is a lighthearted piece about another royal, Prince William. He's a good guy though. And he's having some innocent fun with some goats at a youth fundraiser.

See, he's playing with kids! Which is actually what Randy Andy did with his mate Epstein. Geddit? 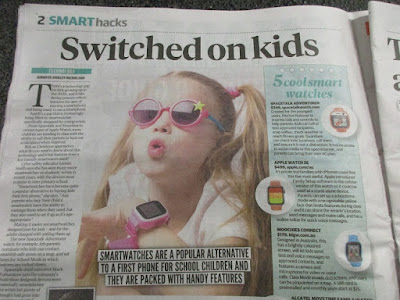 In the same issue there's this story about smartwatches for children. Notice how the young girl is wearing sunglasses, which are traditionally adult attire. She also seems to be pouting.

Look at the headline. "Switched on" is the same as "turned on", right?

If this were just a one off I'd think nothing of it. But the paper is so full of imagery and wordplay like this it comprises an undeniable pattern. So it has to be intentional.

This particular double entendre is reminiscent of another headline they've used more than once: "Kids back in the game." Replace "in" with "on" and the meaning becomes completely different and deeply sinister. 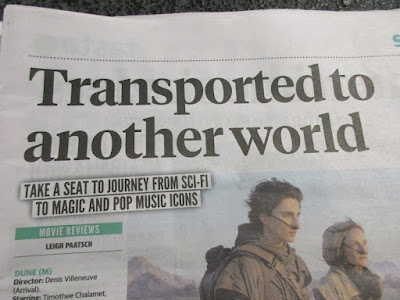 This is the next page in the "Smart" section. Kinda funny, because whoever puts this all together thinks he's smarter than everyone else. But he's really not.

It includes some movie reviews and contains a fave word of secret society wankers: "magic". Everything's a ritual to them, see. All the sick stuff they're into is about casting spells to transform humanity.

They think that by being depraved pieces of shit they're actually creating a better world. They really are that deluded.

Notice how it says "take a seat". You know, like in a car, which brings to mind traffic. 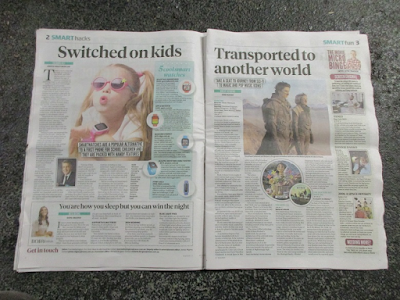 Now if you pull back and look at the two stories together the two headlines form one ...

Of course the vast majority of readers don't see this. They're reading the paper for information. They mentally process each item independently so they don't make the connection.

This is how these creeps "hide in plain sight". It's not about the detailed content of the stories. It's about themes, headlines and images and the juxtaposition thereof.

Below is a video I made when I first started to notice these patterns. Please check it out.

I've made many on this phenomenon since. There is so much of this kind of stuff I simply cannot keep up with it. And this is just in the one paper. It's all throughout the rest of the MSM as well.

It's really quite disturbing when you realize the extent of it.

Posted by MattHaydenAU at 10:45 AM