For a while I've been wondering if Brad Health Hazzard is actually as stupid as he seems. And I've come to the conclusion that yes, he is. Bloke really is a moron.

And he's certainly not alone. The premiers are all morons. So are the clown CHOs. Their stupidity is a big part of why they're where they are. They've been elevated in major part because they're morons.

When I call them that I don't mean that they're the drooling slow moving kind that can't wipe their own arses. They are competent, hard working and can process stuff, sure. They can certainly remain focused and on message.

But they're morons in the sense that they have no capacity for critical thought. They just obediently serve the globalist system, doing what they're told by the higher ups to keep the whole pandemic narrative going.

And they're very well rewarded for that. Which is why they just keep blundering on without any awareness of how idiotic they look to sane, thinking people. 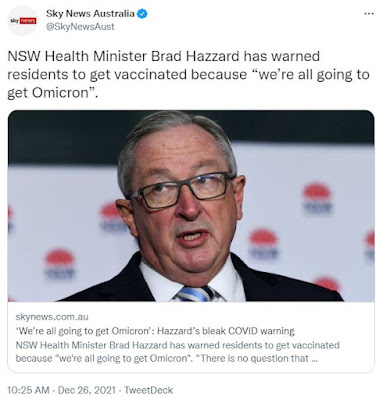 This statement is one of many that shows how dull Health Hazzard actually is. If we're all going to get Omicron, and we know that it's mild, then why the need for the syringe stab?

Also, after being exposed, you develop long lasting natural immunity. What's not to like? Surely the sensible thing is to let nature take its course.

But Brad is completely unaware of the absurdity of what he's saying. That's because his mission impossible (and he definitely chose to accept it, with gusto!) was to do his part in the sinister campaign to get needles into the arms of every Australian by "vaccinating" absolutely everyone in NSW.

So in his tiny mind telling people they're all gonna get Omicron should scare them into "protecting themselves" with the magic potion. He forgets (or is prolly just unaware) that pretty much everyone has realized that it doesn't protect you much at all, really. The data proves beyond any shadow of a doubt that those who've had it can still get the dreaded 'rona.

There are plenty of morons in the MSM as well. Again, they are competent and hard working but incapable of critical thinking. 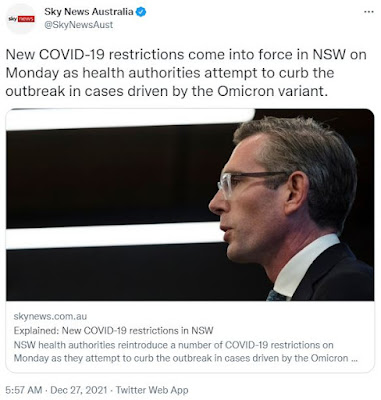 Notice the absurd phrase here. It's an "outbreak in cases". WTF?

A case just means that you've returned a positive result to a dodgy test. Doesn't necessarily mean you're sick and/or infectious. But that's what we normally associate with the term "outbreak".

So, it's a Clayton's outbreak, innit? It's one in which thousands of people who aren't sick have been scared into getting tested for a disease that is no worse than the flu by disgraceful lie factories like Sky News. They must be so proud.

Then there was that SNAFU in which 400 people were told that they tested negative when really it was the opposite. (Apparently there have been worse stuff ups since.)

The "public health" officials were clearly mortified. Check out how ashamed they look in the video below.

You can understand why. But the real dereliction of duty has long been the opposite: using a discredited test that consistently produced false positives. This has been the real scandal right from the start and should have been the main story all along.

But it doesn't fit the narrative. If exposed, the fear factory would have ground to a halt long ago. Which is why this false positive tendency has never been highlighted in the MSM.

And notice how in the clip a siren blares in the background. That's a reminder of another real story: the insane number of ambulances being called out these days.

It's pretty clear what these are mostly for. And it's not for those suffering from the dreaded 'rona, but something related to it.

Any dinkum truth seeking reporter in Sydney (or any Australian city for that matter) would be keen to investigate what's actually behind this phenomenon. But none are. That would be actual journalism, which is now verboten in the MSM as we all know.

Posted by MattHaydenAU at 3:17 PM