Like all mainstream media outlets the Daily Telegraph is a massive lie factory. Its main purposes are to distract the normies with fake news and pump out propaganda for globalist interests. But it's also used for hidden comms for "those in the know". Some of the covers are really interdasting in this regard.

Take this one from November 27th. It's about the push to get Gladys Berejiklian into federal politics by taking out Zali Steggall at the next election. The headline "Operation Gladys" is a clever play on words that invokes Operation Gladio. This is a catch all term for Deep State "stay behind" operations in Europe during the Cold War. The operatives got up to some seriously sinister shit including terrorist attacks in Italy. 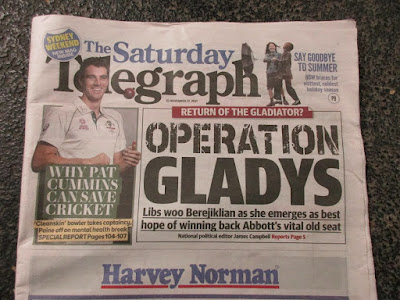 Speaking of operatives, the paper used that term another time to describe Gladys, along with other state pollies who'd resigned.

I think the question above the main headline is also intriguing. It reads: "Return of the Gladiator?" It's in red and white, which is a recurring motif.

It brings to mind the classic swords and sandals epic starring Russell Crowe. He's an iconic figure they love to feature in a symbolic way, such as on the cover described below.