Sam Dastyari quit politics almost four years ago now due to a scandal related to donations from a Chinese company. Yet you'll still see references to this in the MSM, zif it's an isolated case.
This toon from the November 26 edition of the Failing Terrograph is a good example. 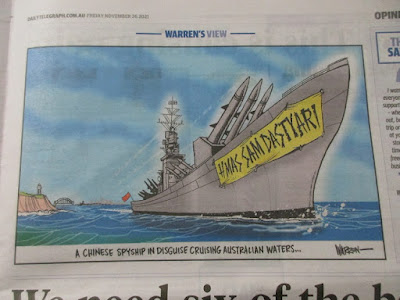 The implication is that this kind of corruption is pretty much confined to one dopey dude and that most members of the Australian political establishment do try to represent us, even though they're not that successful at it.
That couldn't be further from the truth. In reality many of these arseholes have been selling us out in one way or another to commie China for decades now. That's why they're pushing that jab so frantically. They've basically made a deal with the globalist elite -- of which the CCP is a major player -- in which they promised to "get needles into the arms of every Australian". That's why they keep repeating that stupid slogan, and ones like it. They try to make it sound like it's a good thing but it's got nothing at all to do with public health -- as any thinking person realized long ago.
Now that Aussies are waking up en masse to the sheer immensity of this betrayal these scumbag pollies are in a really bad situation. Those controlling them are "not happy Jan!" and are putting intense pressure on them to "get 'er done!". The controlled arsehats are well aware that these hugely powerful players don't muck around when it comes to punishing those who've let them down. Failure is not an option and they could well end up dead.
However, we're in much the same situation. And there are a helluva lot more of us than them. Which is why I'm sure we're gonna win in the end.
If you enjoy these posts, please consider supporting me via Ko-fi. Aussies, know your rights!
Posted by MattHaydenAU at 12:42 PM