There have been several much-derided "conspiracy theorists" who have predicted the current craziness with uncanny accuracy. David Icke is probably the most well known of them.

And we all know about how prescient some toons have been. Take all the spooky predictions that The Simpsons have come out with for example. This sequence in particular really captures the current campaign to jab kids.

That said, I never expected a daggy mid-eighties song and video clip to capture the globalists' plans so well. But that's exactly what "Cathy Don't Go to the Supermarket Today" did.

Apparently the band were part of the Children of God movement. And there are many creepy rabbit holes to do with that organization. Still, it's pretty spooky in its accuracy.

It's all about how TPTB trick the population into becoming slaves with barcodes tattooed on their foreheads. Without them, there's "no way to pay".

Check out the doc. He could have been taking orders from Fauci in Wuhan. 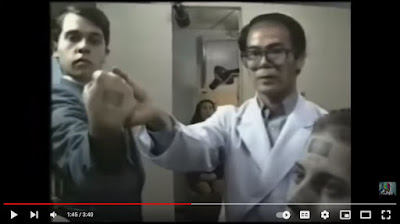 There's even a dude who could easily be Brett Sutton in a face diaper. 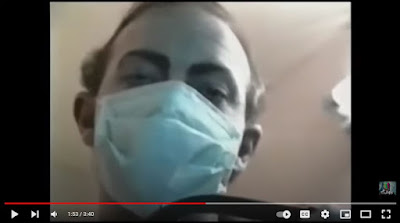 Well, not the big chains anyway. IGA seems to have a more sane and rational policy on the 'rona. They don't demand their staff are jabbed, which is good to know. They do have mask signs up and QR code check ins, but never seem to demand compliance.

So take heart. Something tells me that when your plan for world domination can be summed up in a video clip like this, it's basically doomed to fail.

Posted by MattHaydenAU at 1:46 PM