Sure you've noticed that over the last year or so MSM lie factories have been singling out and demonizing individuals as "superspreaders". This has been a big part of their sinister campaign to push all Aussies towards the jab, obviously.

But there seems to be something else going on as well. So many of these people seem to have jobs related to carrying people and/or their possessions from one location to another. As such, they can be used as symbols to allude to human trafficking. And that's something I've seen a lot of lately in the MSM, Daily Telegraph in particular.

There was that Uber driver in Queensland recently. 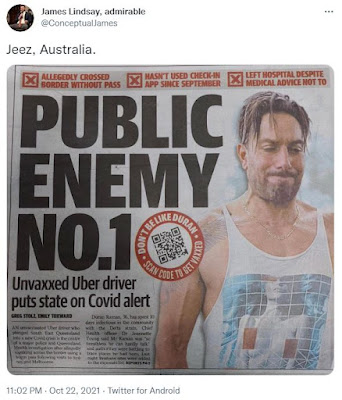 And we all know about the limo driver who brought the Delta variant into Sydney. 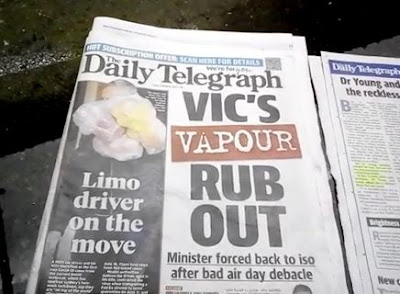 There were those two Iraqi removalists whose mother ended up dead. Very sad situation and I suspect the MSM coverage had something to do with precipitating that tragedy. 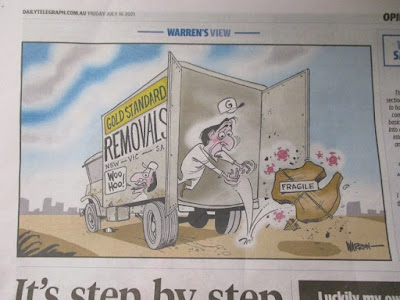 There was the dude in Byron Bay they slimed. Notice how the cover featured him on a jetski with a kid. 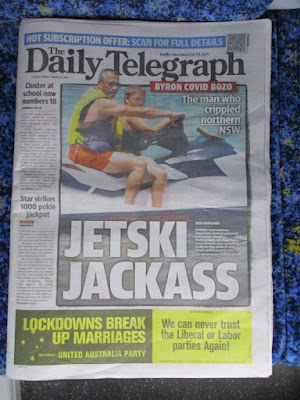 There have also been items that seem to be making an "it's the vibe" allusion to human trafficking. Take this one with the alliterative headline on the bottom (suggesting CCP?) and young Olympians in bags. 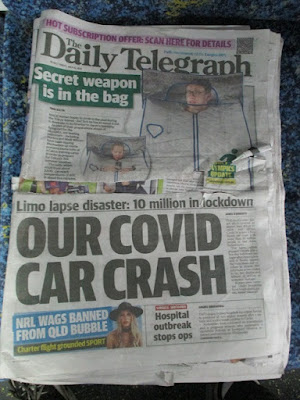 There are heaps of other examples I could include but I think you get my drift.

Now there's Omicron. Why is this scariant spreading on harbour cruises and at pubs, backpackers' hostels and nightclubs? Why not supermarkets, train stations, and old people's homes?

Seems that it is targeting where the yoof mingle. That could be related to them being the demographic the globalists most wanna jab right now.

That's possible but I think it's more likely that these dodgied up developments are being used for comms, or as a cover for some other operation -- or maybe both.

The outbreak at Noah's Backpackers in Bondi Beach was particularly interdasting. There'd been a previous 'rona outbreak at that exact location in the past. Talk about lightning striking twice!

And it was literally a stone's throw from where Tom Hanks took that creepy sock photo that he shared on social media.

Also, I'd noticed weird symbolic patterns in the Sydney paper that seemed to allude to the myth of Noah a week or two before. I even made a video about this, embedded below.

Noah was an animal trafficker, remember. And the Daily Tele has form for equating kids with animals.

UPDATE: Just saw this story in today's issue (December 13). It was about Russell Crowe and some other slebs having a high powered lunch at Otto. 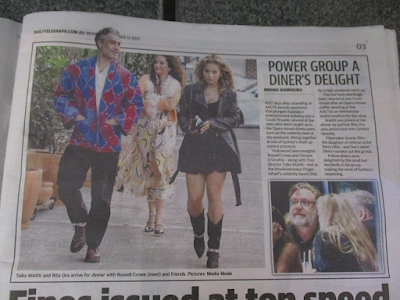 There's a shot of the Thor director Taika Waititi with Rita Ora. Notice how his head's poking up through the border of the story. I think that's a way of saying "Heads up guys!" to those in the know. 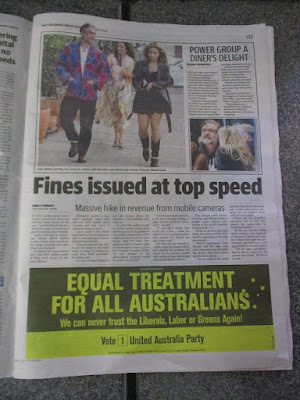 Look at the headline below. It's about speeding fines (that is, the law cracking down on wrongdoers). 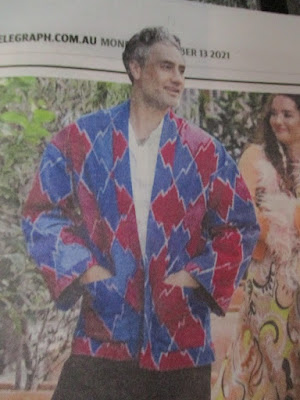 There's a name for that: Argyle.

Where was that major outbreak of Omicron again? Why, at a nightclub called Argyle House in Newcastle.

Sure, could be a coincidence. But do you reckon ... really? Seem to be a helluva lot of them in regards to this narrative. And the item above did refer to a false 'rona alarm at Sydney Opera House which these A-listers were briefly caught up in.

If you enjoyed this post, please consider supporting me via Ko-fi.

Posted by MattHaydenAU at 1:09 PM