The situation in Victoria is becoming so insane and absurd you gotta wonder how much longer James Merlino can keep this clown show going. Brett Sutton, the Silver Flog, recently tried desperately to scare everyone into getting the "jab" and justify the fascist lockdown with talk of an "absolute beast" of a virus.

Yeah, it's such a "beast" that it hasn't actually killed anyone, AFAIK. And most if not all the other people who caught and carried it had to have a test to know that it had "possessed" them.

This "beast" has so spooked other leaders of our so-called public health system that they are issuing dire warnings. Given that Victorian footy players are in South Australia, and they might have been in the eeevil presence of that demonic virus, Chief Health Officer Professor Nicola Spurrier issued a hilariously po-faced warning against touching their beastly balls. 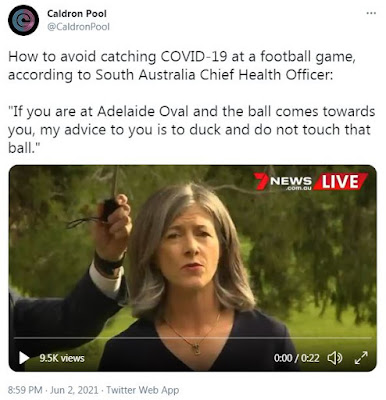 My first thought upon learning about this was, oh come on! This must be the biggest practical joke in our history. It's so batshit and retarded, the good perfessor and her team just had to have been taking the piss out of the MSM muppets. Surely they were all ROTFL that the dopey fake news flogs actually took it as dinkum!

But nup. They were serious. They have clearly been told by those above them in the power pyramid to keep scaring the crap out of the normies at all costs. So, they're pulling out absolutely all the stops. No fake fright is off limits. Absolutely anything goes!

In January I made a clip mocking their desperation. This hopeless clown makes it redundant.

Posted by MattHaydenAU at 1:49 PM