The Silver Slug is a beast of a mollusc!

The meme below, though misspelled, captures the widespread sense of incredulity at how Victorian CHO Brett Sutton has managed to keep his job given how much destruction his decisions have wrought. And people ask that question because they assume that democratic processes are in place, and the Victorian Government is answerable to the people.

But it's not like that at all. It's the globalist elite (Cabal, Deep State, CCP) who ultimately call the shots. The upper echelons in the Australian political establishment and the mainstream media are owned by these demented control freaks.

Brett Sutton is not incompetent. Far from it. He's carrying out a controlled demolition of Victoria's economy and society. He's been very successful so far.

It's fitting that he's been linked to "slug-gate" a scandal in which a slithering mollusc seems to have been placed in a Melbourne food manufacturing plant to basically frame the owner and destroy the business. Similarly, Sutton the Silver Slug seems to have been placed into the Victorian political scene to carry out much greater devastation, though of course he's been much more proactive than the aforementioned mollusc. Just as slimy, but. 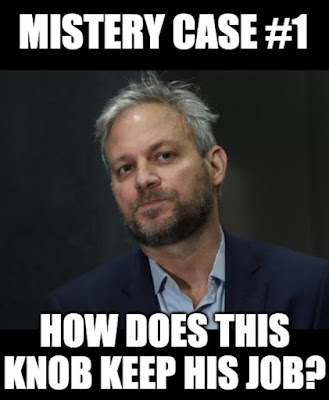 The mainstream media narrative about this guy echoes the meme above. They keep repeating that he and other figures in the Victorian Government are "inept" as Sophie Elsworth says in this tweet.

The Victorian CHO is a vile beast, but very effective in his spineless way. The globalist elite who ultimately control him can't openly say: "Right, we're turning Melbourne into a technocratic totalitarian hellscape. It's basically gonna be Wuhan of the South." And then just swagger in, jackboots and all and set it all up.

No, they've gotta slowly slime into it via "science". And they used Sutton the Silver Slug to do it.

The key to it is to use news of 'rona cases to keep the normies packing their dacks, then tell them that the only way to allay that fear is "vaccination". This whole tactic is being applied across the country, albeit less dramatically than in Victoria. 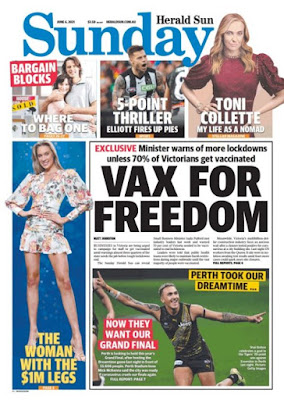 They are so intensely focused on pushing people to get the shot that increasingly they are forgetting to remind them of the so-called immunity aspect. They are basically just saying: "Wanna be free? Get the jab. Don't do that and you stay locked down."

They want you to believe your arm is the door to the world as we used to know it, and the key is the syringe. If you let them stick one into you, the door opens wide. (And why do they have that needle obsession, BTW? There are other less invasive ways of administering "vaccines", after all.)

What they are doing is extortion, pure and simple. They have a goal of 70% jabbed because this is what they've been told to deliver by those above them in the power pyramid. It's like an authoritarian parent grounding an unruly kid: "Behave yourself and do these tasks that I give you, then you can go to that party on Friday night." 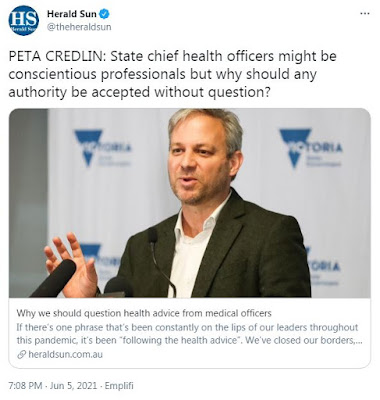 Above is a slightly different take on what the Silver Slug and his ilk are up to: They mean well but are not infallible.

Well, it's much worse than that! They are basically just controlled arsehats wearing massive clown shoes. Their prescriptions are not just fascist but utterly absurd and should be met with open mockery, not reverence.

Posted by MattHaydenAU at 1:23 PM