The candy-colored clown they call the Sutton

Back in October last year I saw a jaw-dropping tweet from a big time Dan fan and blue check journo. Melbourne was in lockdown, as it is now, and she was determined to see the dire situation in a positive light. She said that the city was beautiful "even when it sleeps". 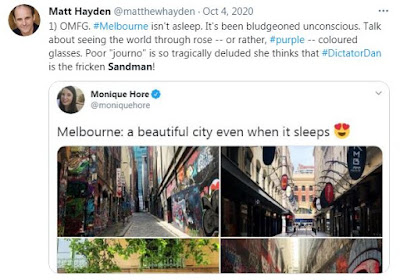 At the time I observed that she thought the Goblin of the South was actually the Sandman. That brought to mind a classically creepy scene from the movie Blue Velvet in which psycho Frank Booth (Dennis Hopper) listens to Ben (Dean Stockwell) mime to Roy Orbison singing his classic "In Dreams". I'm sure you've heard it but it describes a "candy-colored clown they call the sandman" sprinkling stardust on him so he can drift away and dream of his love.

James Merlino has now replaced Stairman Dan, but I think the same analogy applies -- perhaps even more so. Merlino looks a lot more like Dennis Hopper than Dan did, after all. 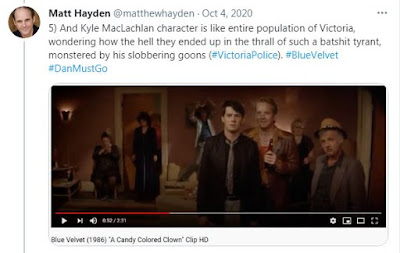 Again, so-called "journalists" seem to be doing what Ben does in that surreal and sinister scene. They serenade the psycho Booth/Merlino, indulging his fascist dreams of a technocratic utopia.

Now, I think things are even worse than they were under Premier Andrews. It's like these paid performers have now become zombies themselves. They've actually imbibed the Kool-Aid meant for the sheeple in the form of the "vaccine". So, they're singing to themselves as much as to the psycho.

Why are we always "plunged" into lockdown? I would prefer to be immersed gently whilst Brett Sutton sings me a lilting lullaby.

OMFG. They're letting the CHO put them to sleep so they can dream of seeing their family and loved ones by getting the "jab". Tragically infected with the mind virus, they are passing it onto their readers via the MSM.

There are just so many of these local blue check "journos" that have already done this, I think the odds of one or more of them dying from blood clots or similar averse reactions are actually quite high.

That's why I think this other rendition of the Orbison classic captures the insanity unfolding in Victoria. It was obviously inspired by David Lynch's use of it in his movie. But unlike Ben, this performer really does look sick enough to keel over and die himself.

This is where we're at people. The mainstream media are totally owned and controlled by globalist elite members of a death cult. And they'll even sacrifice their own in pursuit of their New World Order agenda. Sick!

Posted by MattHaydenAU at 1:32 PM