The vaccine zombie apocalypse is nearly upon us

Really, how stupid would you have to be to not see where all this 'rona madness is going? This was never about a virus, and that was obvious right from the start. Getting as much of the world's population vaccinated as possible was always the aim.

With a majority or something close to it "jabbed" the globalist arseholes masterminding the whole shitshow would then be able to use that as leverage for the introduction of vaccine passports. These are being rolled out in various countries already. And ScoMo saying he would consider the system for interstate travel is chilling. 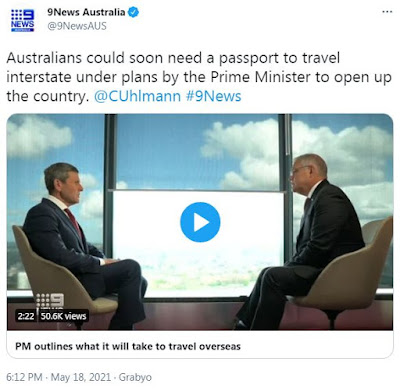 Some have theorized that this is just him playing wedge politics. They say he's just getting the dopey premiers to push hard for it, thereby creating yuge outrage, and giving him an excuse to nix the idea.

I dunno about that. The guy is a globalist zombie. He could well be seriously tryna get this through to satisfy the demands of his controllers.

The biggest laugh is that ScoMo is supposed to be a conservative. But really he was always a globalist tool. He played the role of patriotic anti-woke warrior when doing so was required. And he did that pretty half-heartedly anyway. Now look at him!

He's not the only one. Pretty much the entire LNP have gone along with this sinister globalist push towards an AI controlled hellscape. That's the same in the UK, Canada, New Zealand and elsewhere.

Then there are the "Christian" leaders. 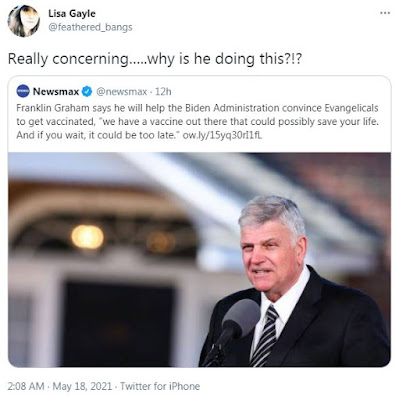 There are some very creepy rabbit holes to do with this dude and his old man. It looks very much like most churches have been infiltrated by globalists a long time ago.

And you can understand why the occult elite were so keen to capture the commanding heights of Christianity. Basically what's unfolding now is a titanic grudge match between those who believe in a God that is above us -- bigger and more powerful than humans could ever be -- and those who think that they are gods -- superior beings who get to define and control everything and be masters over all human life and death.

That's why they advocate abortion and euthanasia. They're in a death cult, basically! And now they say that vaccines are the only way to combat the dreaded 'rona -- but they wanna save your life this time. Yeah, suuure!

But back to Oz: The blue checks are of course overwhelmingly pro-vaccine. 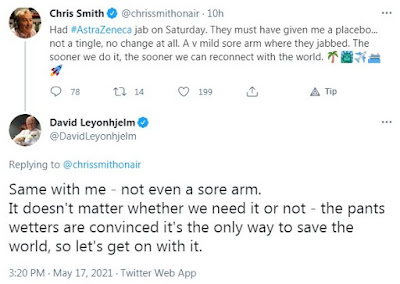 As you can see it's not just the dopey lefties who are "hot for the shot". Heaps of "conservative" and "libertarian" ones are as well.
David Leyonhjelm actually wrote a book called Freedom's Salesman. Now he's Big Pharma's spruiker. Sad!
You've really gotta wonder why so many otherwise sensible people are eschewing critical thinking and moving with the mindless MSM on this.
Maybe it's something to do with Freemasonry? Most leading Aussie pollies and movers and shakers in other fields are in that church. It's like a prerequisite for elevation. Just a theory but it would explain much of what's going on.

I think a lot of it is just due to basic brainwashing, however. This guy doesn't look too bright. And he's about par for the course when it comes to local "journalists".
I feel sorry for these people. They suffer bigly from the mind virus. Sadly, they are passing it on to many of their viewers as well.
Actually, that's their whole job! The hidden globalist elite have long been elevating people who are competent and hardworking but incapable of critical thinking and, most importantly, easy to control. They tell them that what they're doing is good when they know full well that it's evil. The useful idiots just keep on keeping on, never questioning the motives of those above them in the power pyramid.
You would hope that the profession of journalism is full of people who are the antithesis of that. Sadly it is not. 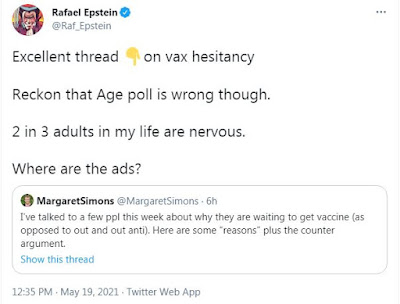 Still, there is hope ... Remember that that this dude is with their ABC. Even though that joint is chockas with some of the most tragically mind-controlled muppets in the entire country, quite a few of them sense that things are not quite right.
So, they're not all vaccine zombies! That in itself is heartening.

Posted by MattHaydenAU at 2:06 PM