One of the most remarkable aspects of this coronavirus "pandemic" is how woke the virus is. This was apparent early on when BLM marches were allowed to go ahead, but other demos that weren't so in line with cultural Marxism were banned or at least condemned by TPTB.

Of course this was nothing to do with the bug's intentions, but everything to do with the agenda of those running the whole psyop. Ultimately this "Coronapocalypse" is all about installing a fascist global control system run on AI. For these globalist aresholes to pull this off they need to destroy national identity and culture among other things. That's why one of their local muppets Mark McGowan shut down Perth and Peel just before Anzac Day. This was clearly meant to ruin the commemoration for all the West Aussie patriots.

They hate Christianity also. It's one of the foundations of Western Civilization. Hence that "Avalon cluster" that ruined Christmas for Sydneysiders, and to a lesser extent the rest of the Aussie population. And how about that outbreak just before Easter? It resulted in Byron Bay copping heavy restrictions and their beloved Blues Fest being nixed at the very last minute. That was another attack on Christianity, as well as a way to punish the local hippies for their low vaxx rates. Twofer!

And now we've had this latest 'rona outbreak in Sydney over Mother's Day. What are the odds?

It's not just government and academe waging psychological war on us with these measures. The utterly corrupt MSM have long been part of the psyop, so they are doing what they can to dispirit and confuse people as well. Check out this Daily Telegraph cover from the day before Mother's Day. 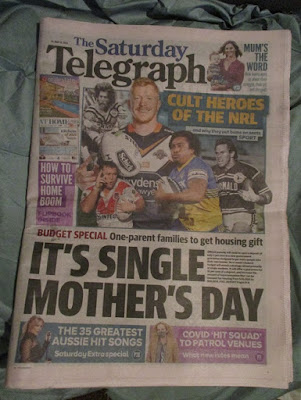 Notice the story about one parent families. Even if you don't buy that paper you're still going to see that headline. Millions of people would have been reminded that many families are fatherless. It's a way of normalizing the concept.

As Breitbart said, politics is downstream from culture. And the creepy cultists at the top of the globalist power pyramid use cultural Marxism as their political divide and conquer tool. That's why wrecking the traditional nuclear family and sewing hatred and distrust between the sexes is a high priority for them.  The victim feminist loathing of traditional femininity, motherhood and fatherhood is a classic example.

Then there was the actual Mother's Day issue. 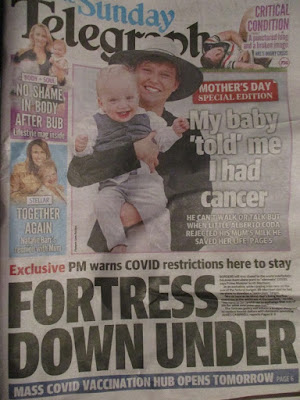 It purports to celebrate the ritual specifically and motherhood in general. But look at the actual story that is featured. It's about how a bub's reaction to his mum's milk alerted doctors to a serious illness that she had.

In one way it's a feelgood story. But it's also a nasty, sneaky, symbolic attack on motherhood itself. What could be more natural than a mother breastfeeding her child? Yet in this story it so happened that the milk was poison to the bub. Yes, it had a happy ending, but the association remains: her milk, and by extension motherhood itself, is poisonous.

And it's not just the cover that has this subtext. All the stories in that issue and the one before are about issues that detract -- or distract -- from the idea of traditional, nurturing, devoted motherhood. Subjects covered include the challenges of continuing a career as a mum, infertility problems, adoption, and how giving birth can ruin a woman's figure.

There's a real vibe that emanates from this. It's like the editor is saying that motherhood as we used to know it is gone for good; past its use by date.

It's really creepy and wrong. And check out these headlines about "axing mothers" near the end of the video below. Definitely a trend.

Posted by MattHaydenAU at 6:59 PM