There is no doubt that we are in a war. But it's not the usual kind that's open and declared, or even a cold one like the decades-long standoff between the West and former Soviet Union. It's an invisible mind war being waged by a select bunch of globalist control freaks on the vast majority of the world's population.

Fake news seems to be their biggest weapon. The MSM's job is to fill as many people as possible with intense fear of the dreaded 'rona. Then they'll go out and get vaccinated. With enough normies in this category they can then push through with vaccine passports. That means the death of liberty forever.

Fear is absolutely vital because it's a great motivator. And it stops people thinking critically. All you need to do is calmly look at the craziness of the lockdowns, mask mandates and all the rest of it for even a minute and you can see that while the 'rona itself seems to be a dinkum virus the massive global campaign to keep us all "safe" from it is something else entirely. It's a Trojan Horse for total central technocratic control of all our lives.

Of course all the establishment politicians are also owned and controlled by this group. They are flogging the fear like there's no tomorrow. Even when their posts and statements seem positive, they're still tryna scare people. 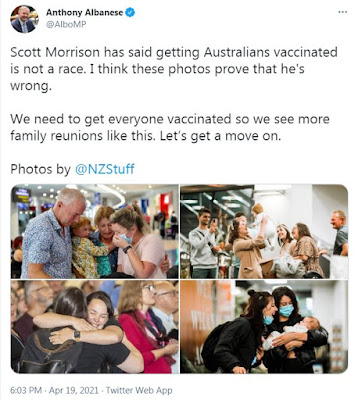 While Albo is using the issue to bash ScoMo and the Govt, he's still invoking the big lie of the globalists: This virus is so terrible that all must be vaccinated (which is the only way). Only then can joy, love and freedom return. So sneaky and twisted.

Speaking of Albo, why is he masked in the shot below? His thread says that the unmasked dude hasn't had his "jab" so is it because he's worried about giving the dreaded 'rona to (or getting it from) him?

But that can't be! Albo's been vaccinated already -- or so he reckons ... Well, he surely has the mind virus, which severely lowers IQ. And he was at about 66 to start with. Sad! 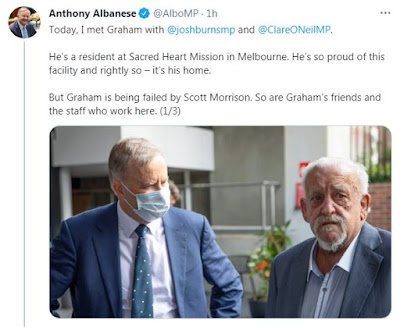 Speaking of Albo, here's another social media update from him that highlights the way he appeals to feels rather than reason. 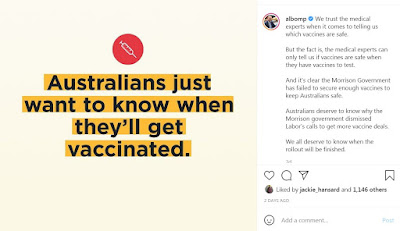 There are so many kinds of stupid in this brain-shart, dunno where to start. But I'll say this: The vaccine rollout itself is a yuge test (as the Zombie Squirrel himself admitted). Albo confirms this by saying "the medical experts can only tell us if vaccines are safe when they have vaccines to test". And who are they testing these on? Aussies, that's who. FFS. It's as evil as it is absurd.

In any case, the mainstream media do occasionally do their job. Adverse reactions to the vaccines are being reported, although the link is being downplayed where possible. That is of course the exact opposite of what they continue to do when it comes to people dying from (or rather, with) the dreaded 'rona.

Slowly but surely people are waking up to the lies. They can finally see the sinister motivations behind the fake news fearporn. As a result, more and more of them are refusing to get the "jab". I'm hopeful we'll reach a critical mass before too long and the whole evil campaign will finally fall apart.

Posted by MattHaydenAU at 12:42 PM