A clear and present Hazzard

The 'rona related insanity continues here in Sydney. It seems that we're currently having a kind of "Claytons lockdown". It's not the full catastrophe. But it's still very damaging to business and people's mental health.

And this is all because of terror over the number of recorded cases of the beastly Delta variant. AFAIK no one has died. And the test being used is highly unreliable and easy to manipulate. The globalist controlled "public health experts" are of course desperate to keep the fear going, and so are including what I suspect are many false positives in the stats.

Early on in this entirely confected crisis Brad Health Hazzard said the 'rona was a "near and present danger". Yeah, one that hasn't killed anyone, or -- it seems -- even made anyone who was "infected" develop severe symptoms. What a fricken clown.

Given Hazzard twice mentioned the NWO in COVID-19 pressers, maybe he meant "clear and present danger"? This is a US legal doctrine related to restraints on freedom of speech, assembly, and related issues. So, perhaps this was a signal to secret society wankers that this "outbreak" furthers their beloved NWO agenda?

Health Hazzard: "Each had stood not far away from each other from a very short period of time and then it would appear that one of them possibly moved through the airspace that the other one had occupied."

LOL. So, it's beyond fleeting. You'll be able to get it tweeting next!

"CCTV footage showed the case detected yesterday caught the virus from the limousine driver -- original case from Eastern suburbs cluster -- after they were briefly standing near each other."

So 'rona transmission can be watched in real time! LOL.

If the "Beast of the east" can actually be seen moving between hosts, why the need for any contact tracing at all? It's well established that the 'rona is woke as, and much prefers to infect big bad meanies into conspiracy theories and the like. So why not coax it into some far-right, QAnon-loving host whose blood has been infused with purple dye?

Those microscopic spiky Nerf balls will gobble this up, replicating the hue endlessly within the viral community. Soon it'll be visible on CCTV in superspreaders' breath. Simples. 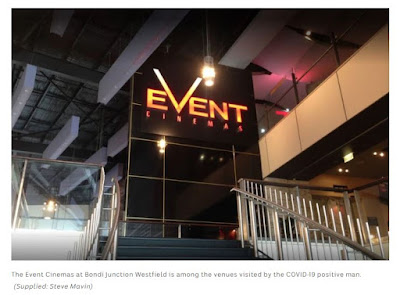 But back to Hazzard's use of that very memorable and dramatic phrase: Maybe it's just that Brad thinks he's in a thriller, and sees himself as a heroic Jack Ryan type ...

In any case, this whole rolling shit-show is like a very bad movie.

Firstly, there's the limo driver being blamed for all this. When I first heard about this, I couldn't help thinking it sounded suss.

What comes to mind when you think of a limousine? Rock stars, champagne, groupies -- also movie stars and other kinds of entertainers. In short: showbiz. What's the essential characteristic of this? It's fantasy; not real.

Could this have been more "hiding in plain sight"? I think so.

Still on the bad movie theme this cluelessly superspreading dude saw The Hitman's Wife's Bodyguard. And it was an advance screening. Ever been to one of those? Me neither ...

Two of the main protagonists in this comedy action thriller are a notorious conwoman and an assassin. Is this a way for secret society wankers to tell each other that this "lethal" threat is all a con, and a big joke to them? Again, I think it's possible.

Another data point: The hitman is played by none other than Samuel L Jackson. He is well known as a Hollywood occultist who has enthusiastically pushed the whole 'rona psyop, most memorably with his reading of "Stay the F at Home" while wearing a very spiffy royal purple tracksuit.

Then there's the cinema itself. The logo features strong V-symbolism. And we've seen an awful lot of that lately haven't we?

Whoever is ultimately pushing this is leveraging narratives and archetypes that are deeply embedded in all our minds thanks to the power of Hollywood and the MSM.

As well as utilizing human icons for psychological manipulation, the location chosen for their testing blitz is also iconic: Bondi Beach. And they've been doing this on and off for many months now.

You know when this site was first used for pop up testing? April Fool's Day.

See what they think of us? Wake up and don't get played by these evil arseholes!

Posted by MattHaydenAU at 1:23 PM