I've written before about this blue dog pattern in the Failing Terrorgraph. I know some people might think I'm being obsessive about it. And yes I probably am.

It's not some super-significant thing in and off itself. But it points to something hidden in the shadows, so to speak. That's this weird cult that so many globalists are members of, or at least respect.

From what I can tell the blue dog motif represents Sirius the dog star. It's also called the "blazing star" and is significant in Freemasonry in particular.

There are heaps of Masons in the upper echelons of all Australian institutions. So they love to show their reverence for this symbol whenever they can. It's kind of like coded genuflecting for secret society wankers.

For some reason this phenomenon is more pronounced in the Sydney paper than other outlets. But you do see it right throughout the MSM.

It's often a big factor in which stories they choose, the wording of the headlines and how they're laid out on the page.

Take this story from the December 26 issue. Hounds feature in all but one of the critter shots. (Notice also how the headline clearly equates animals with humans. More on this in the video embedded below.) 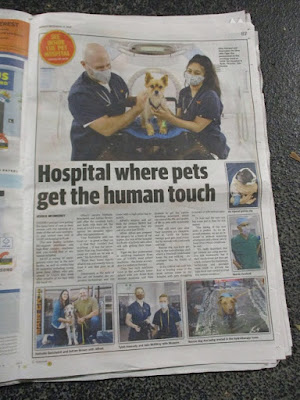 The hero mutt -- surrounded by blue, of course -- is being treated with great reverence like he's an idol in some strange ritual. He's like their extra-spesh, golden-haired boy or something. 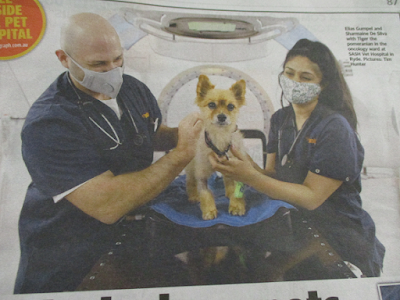 Another adored pooch whose owners (or is that servants?) wear a lot of blue. 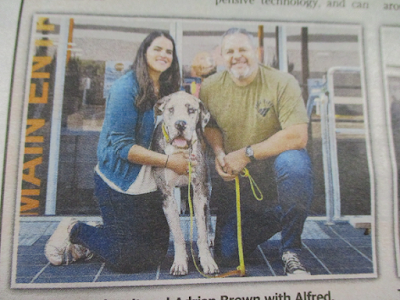 The masks always look absurd. But they seem doubly so when it's only the humans who are wearing them. It's usually the dogs that are muzzled, innit? 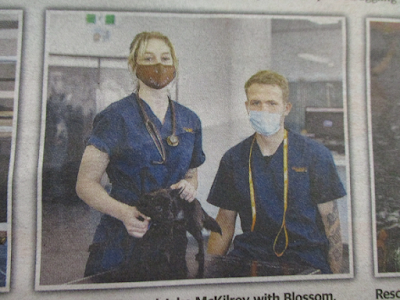 Blue harness. And how many people have ever had "hydrotherapy"? 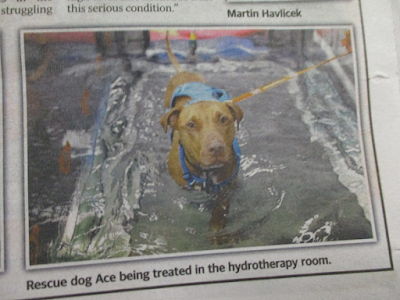 As I've said before, there are plenty more examples like this. I'll often see several in the one issue. I simply do not have the time to collate them all, let alone write blog posts about them.

The reason I want people to know about this is because it shows that the MSM is being run by people with hidden agendas. Of course we all know about the ideological stuff going on under the surface. There are unstated financial forces at work too. But the blue dog motif  and others like it constitute proof that there's a batshit cult element at play as well.

When you really get a sense of just how deeply embedded and pervasive this is in so many institutions, much of the current craziness becomes easier to understand.

Posted by MattHaydenAU at 1:31 PM