Creepy car comms in the MSM

I don't think there's any doubt that many MSM news items are there primarily for the purposes of comms. Many of these involve celebrities and what happens in their private lives. Being used in such a way is part of the contract they've made with the puppet masters. If they didn't agree to this they wouldn't have the fame and money they so clearly crave.

There are many other stories about minor events that hardly seem newsworthy at all. You think, why are they there? Some of those are for comms too I reckon.

What they'll often do is focus on some interchange on social media and build a whole story out of it. (And I'm not just talking about how the MSM will take tweet frenzies as an example of their dreary cultural Marxist BS. That's the political level, which is something else.)

The ones I'm referring to are when something that just doesn't seem quite right gets turned into a story which has specific elements that feel kinda forced or added on.

Take this one about the social media uproar related to the vandalism of a car parked in the disabled bay at a Coles in Melbourne.

That sent my spidey senses off. There are heaps of little bitch-fests on Twitter and the like. Why focus on this particular one?

Well, I think it was to give them the justification for publishing this photo of the offending car. 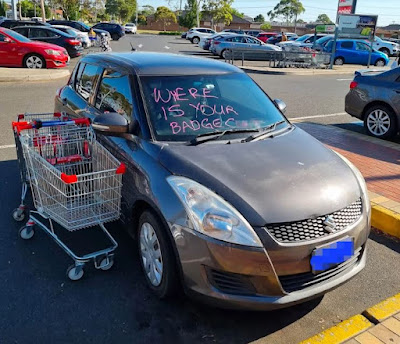 Cars bring to mind traffic. And notice the colour of the lipstick along with the empty trolleys next to it. The article itself drew attention to these two aspects of the photo as well as the make of the car:

The message, written with what appears to be a pink marker, reads: "WHERE IS YOUR BADGE C***."

Two Coles shopping trolleys are also placed next to the Suzuki, which is parked at Keilor Central shopping centre.

I think this is comms related to this evil trade that I think is symbolized by pink in particular. Maybe they're saying that the orders from Japan were empty, and the local dealers were "not happy Jan"!

Then there's this other story indirectly about Coles (which has that distinctive red and white logo). It describes how various brands of butter have been recalled.

Absurd, because there are no deaths from these spreads AFAIK. Yet the you know what, which is still being aggressively promoted by government and media, has already killed hundreds if not thousands of Aussies.

Curious, I did a search for "butter" on Twitter and found out that a Korean boy band called BTS had a hit song about it.

It seems to be alluding to some extremely powerful illicit drug. And butter is kinda gold, remember. That's another motif I keep seeing in the MSM.

Look at the official video. Notice all the pink, red and white, and gold in it. And look closely at the lyrics on screen. The condiment is given a slick and glamorous make over and seems to bestow superhuman qualities on those ingesting it! Remember that butter comes from milk, which is produced by all mammals including humans as food for their kids.

The clip is reminiscent of "Pink" by Aerosmith. That's all about this drug as well, I reckon.

I know it sounds out there. But I think the butter recall story and the lipstick on the windscreen one are related somehow.

I think this whole trade is getting wonky as, and the globalist elite who run it are becoming really, really desperate.

(Oh, and BTW, check out the one about Vegemite below. Same code too, I reckon.)

Posted by MattHaydenAU at 1:32 PM