You may wonder why so many pollies remain on social media. Sure, they want to get their preferred narrative out to the voters who do support them, but they usually receive so much abuse from the normies you'd think most would decide the whole thing constitutes a net loss.

But there's another reason they're on. They are all part of the globalist program, which is focused on removing many of our rights. So they want to send out hidden messages regarding this agenda to those on their own elite level without us finding out what they're really up to.

That's why it's worth looking very closely at their tweets and updates. They're not always coded comms, but sometimes they are. 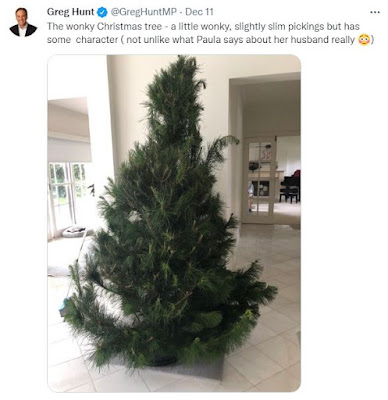 It's always nauseating when pollies try to endear themselves with the public by sharing glimpses into their daggy personal lives. On one level that was clearly what this update was meant to do.

But I think there was a lot more going on under the surface. Notice how he used the term "wonky" twice. Among other things it means "not functioning properly or normally".

I think this might have been a coded reference to the job that he as the Australian Health Minister was given by his occult controllers -- namely, the vaccine rollout. A pine tree has needles, after all.

Maybe it was meant to symbolize something else as well? Most Christmas trees are evergreen. And we all know that this was Hillary's code name.

There was some very interdasting speculation about that massive ship the Evergiven (part of the Evergreen fleet) being stranded in the Suez Canal, remember. Could this relate to that somehow?

Then there's the reference to slim pickings. What did that mean?

Pickings refers to harvesting. And what do you harvest from a Christmas tree? The presents? No, they are usually placed at the base.

Could it have been an allusion to the nefarious activities of the occult elite Cabal who control the political establishment, as well as the media? I think that's possible given how insane the system we now live under is, and the outrageously unscientific "public health" directives Hunt himself has facilitated.

Also, what's with the "flushed" emoji. Why bring that into it? Doesn't seem organic at all. That, like the classic Vegemite jingle, suggests a "rose" in a cheek. There's a deep (white) rabbit hole to do with that imagery as well ...

Sure, I'm speculating wildly. But I do think it's worthwhile because he, along with ScoMo, has form for detailed use of symbolism.

Remember how he cast himself as a kind of military saviour in the war on the 'rona and he and the other political "top brass" kept flashing that stupid V-sign at every opportunity?

That was creepy as. So, I wouldn't be surprised if I'm warm with my theory on the tree tweet.

Posted by MattHaydenAU at 12:06 PM