In the heat of the light

Here is another example of what I call symbolic incantation in the Failing Terrograph. It's from the January 9 issue. Legendary actor Sidney Poitier had just popped his clogs so all the "great and the good" across the world were waxing lyrical about what a total champ he was.

The Sydney paper ran the obligatory laudatory spread and it had a couple of interdasting elements. There was the royal purple border, for example. 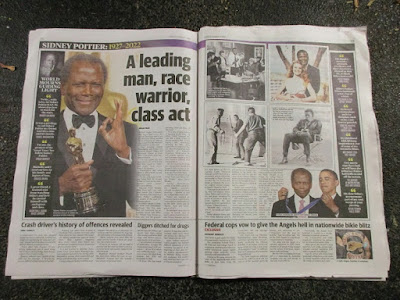 And check out the photo they chose of him getting his honorary Oscar in 2002 for lifetime achievement.

See that hand sign. It's an occult elite fave and symbolizes the "666". Of course he may have just meant it to mean "Okay". But given the Tele's love of occult elite symbolism, I think it was chosen for the Luciferian connotations.

Speaking of which, the headline reads: "World mourns leading light." Who is the bringer of light? 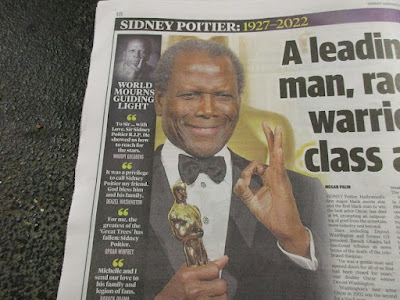 Then there's the shot of him getting another award, this time from noted globalist occultist Barack Obama.

See how the word "hell" from the headline of the story below about bikies lines up perfectly with his pink tie. 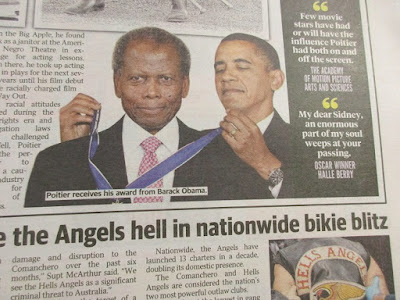 I'm pretty sure that's not a coincidence. They have form for this kind of thing.

"Hell's Angels" also brings to mind Lucifer because he was the angel who fell to Earth, remember?

Not only that, they've cleverly reversed the bikie gang title in the headline. Turning things upside down is a favourite tactic of the occult elite.

Maybe they were implying that Poitier himself was figuratively from hell? Everyone thinks he was some kinda saint. But perhaps they were telling their creepy mates that really he was one of them, a demonic dude who supported the NWO agenda, or something.

And remember that pink is associated with that horrifically harvested drug I've blogged about recently. As well as being an extremely powerful psychedelic it's supposed to be a kind of "fountain of youth".

Could this have been why Poitier, like so many other Hollywood stars, lived so long? Who knows, but I don't think it's impossible.

Posted by MattHaydenAU at 2:57 PM