I've written before about how there's often a creepy rock spider vibe in the Failing Terrorgraph. Here's another example.

In the January 6 issue there was a story about a competition to find the local bogan who sported the finest mullet. 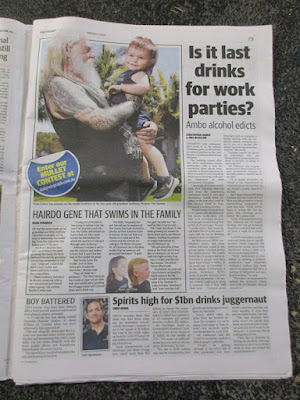 As I've mentioned previously the images and headlines are laid out on the page to suggest some kind of subtextual theme or message.

Now look at the headline for the story on the bottom left of the page, right under the words "Hairdo gene". 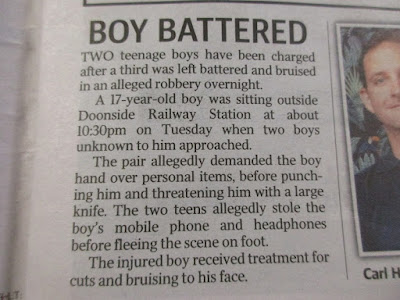 You see this kind of creepy stuff all the time in the shitty propaganda peddling outlet for globalist scumbags, so there is no way that this could be there by chance.

Given its proximity to the mullet story, the headline "Boy battered" is clearly meant to bring to mind the idea of killing kids and cooking them.

That's deeply sinister in itself. And it may also be some kind of allusion to Madonna's bizarre IG clip about "fried fish". The reason I say that is because the obnoxious rag often features and makes reference to the occult elite in the US entertainment industry.

In that video she looked pretty wonky, to say the least. And she sang that she had to have fried fish because there was no more "pasta". Something tells me she might have been signalling a desperate need for something a lot of other slebs craved at around the same time ... 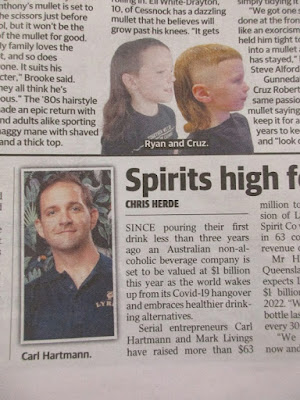 There are other aspects of the layout that make the page creepier still. Notice how the "boy battered" story talks about two boys being charged. And the mullet competition story has a photo of two boys. Again, not by chance.

Directly below that photo of them are the words "Spirits high" from the headline of a story about a beverage company. This evokes the idea of their spirits (that is, life force) having left their bodies. "High" also brings to mind drugs.

This occult theme is definitely related to the powerful substance Madonna seemed to be alluding to in her batshit "mansion fever" video. 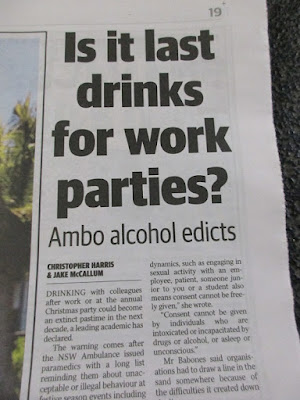 Speaking of "spirits", there's a related headline at the top of the page. It's about alcohol, drinks and parties.

This might be specific comms related to this whole subject. The hair of the bogan oldster and his grand sprog are above the border of the story. So this looks like another "heads up" to "those in the know" -- perhaps about a shortage of this "good oil" (see video below).

Of course this is all just speculation. But I do think I'm close to the mark with at least some of these observations.

Posted by MattHaydenAU at 6:44 PM