I'm sure you've heard about this controversy over the release of notorious pedophile Bradley Pen Dragon in WA.

When I first heard about this I thought it notable that this creepy looking rock spider was given so much media exposure. It's like they were associating this evil crime with his almost theatrically sinister appearance. It's like what they used to do all the time with Dennis Ferguson.

But as any critical thinker knows, there are many well-dressed, benign-seeming child predators who get away with it because they're members of the local or global elite. Hell, some of them are even leaders of nations and world famous celebrities! 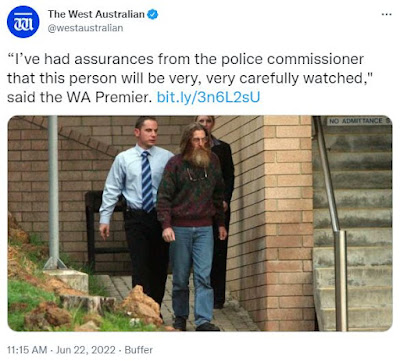 Also, love the bricks in this particular item. Very Masonic.

Speaking of which, why are the occult elite reminding the masses of this stereotype now? Are they worried about what may be revealed in coming months?

I think that's part of it. There may be some verbal symbolism involved as well. That's to do with his surname, Dragon.

Couldn't help thinking this was a coded reference to the band, and ScoMo's extraordinary rendition of "April Sun in Cuba". Are they hinting at developments regarding the former PM?

Another reason I say this is because there was another recent allusion to dragons, this time from Sly News. 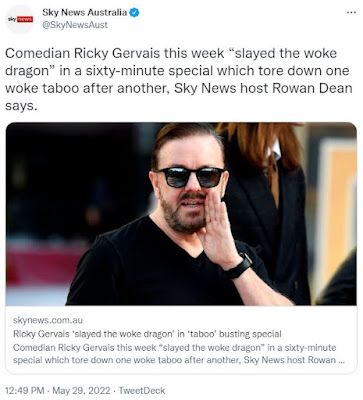 Note that the photo chosen has him wearing black. He seems to be making some sort of secretive comment. There's pinky-purple behind him.

IMO being this forensic about what they share is justified. They have form for this kind of stuff.

Then there's the video itself, embedded below. As well as the woke dragon reference Dean mentions a dam bursting, which brings to mind liquid and pressure.

After the Gervais segment there's a clip of Dave Chapelle, who as we all know is a black dude, making fun of transgenderism with a specific reference to blood in the form of menstruation.

Dean then describes the specifics of the gag afterwards, even though it's completely obvious what the comic meant. Seemed he wanted a certain cohort to take note of that particular segment.

Chapelle mentions Eminem in his routine. The rapper, like so many rock and movie stars, is high up in the occult elite system and his alliterative name evokes "master mason".

I know Dean's a conservative and seemingly a good guy. But remember that politics is downstream from culture as Breitbart said.

If my crazy conspiracy theory is correct, and many people high up in the local MSM are aware of hidden evil perpetrated by those at the apex of the global power pyramid (even if they don't participate in it themselves) then you've gotta ask: Why don't they tell us about it? Isn't that their job?

Posted by MattHaydenAU at 1:43 PM