The more closely I look at the clear symbolic patterns in the mainstream media, the more sinister this whole globally run system becomes.

I highly recommend that others start to do this. Those editing these outlets are putting an awful lot of time, effort and care into arranging content in a particular way to bring out certain themes. They seem to be in some sort of weird cult, or at least deferring to the demands of one.

As mentioned before, this phenomenon relates mainly to headlines and images as opposed to the specific content. One common and creepy pattern involves the placement of words describing death and violence next to photos of kids in other stories. Of course that will happen from time to time by chance. But you see it so frequently it's suss as. (Check out the example at the beginning of this video.)

So there's that general phenomenon going on. And sometimes I see things that make me think that there are more specific coded messages being conveyed. Take the May 24 issue of the Failing Terrorgraph.

This was just before the shool shooting in Uvalde. Given what was in previous and subsequent issues it really does seem that there was some kind of batshit symbolic incantation going on.

Look at the cover. "Locked and loaded" is a very specific term related to gun usage. But here it applies to a story about prison gangs. Eh? 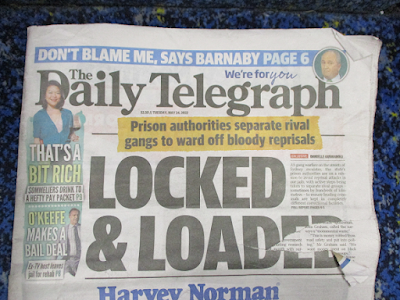 On page 9 there was a story about the funding of police training in NSW. Notice how it says that they were being kept out. This is spooky when you consider what actually ensued at that school in Texas.

On the right hand side of page 8 there are three mentions of death in the headlines. 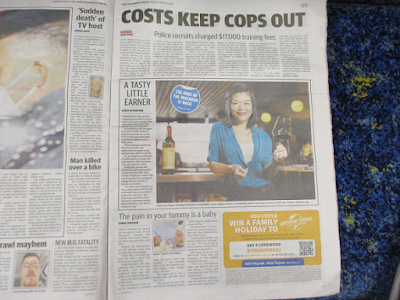 Note the story on the bottom of the next page with the headline: "The pain in your tummy is a baby." This is dehumanizing in itself. And it's right underneath a story featuring red wine titled "A tasty little earner".

Please check out this video to see why this creeps me out so much. 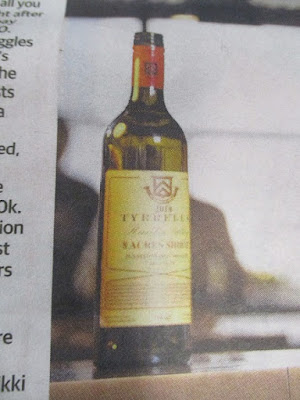 The drop chosen for the shot is Tyrells. Remember that this is the surname of the toddler who disappeared back in 2014. Developments related to this mystery contantly reappear in the MSM. A particular shot of him with his sole exposed is usually featured.

If this was a one-off I'd say it was a coincidence. But given this sinister lie factory's form for this kind of stuff it looks like it was carefully selected.

This is the very next page. 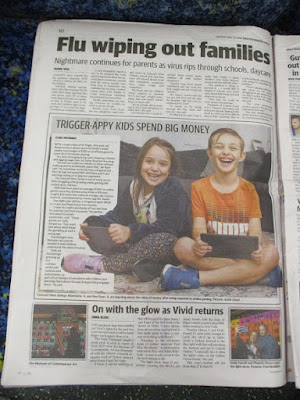 The top story is about families (kids) being "wiped out". And look at the one directly below that. As well as the monetary aspect -- like with "tasty little earner" -- there's the wordplay on trigger happy, which of course evokes guns.

Given what's on the cover you've gotta ask: What are the odds?

Then there's the story about the Vivid Festival -- which I'm sure you know is a collection of light shows -- returning to Sydney. Who is the "bringer of light"?

Note also how the photo on the right has orange, pink and blue in it. Look at the one of the kids directly above. This colour combo also features in that shot.

If this was intentional to make a link between them -- and I think that's likely -- consider how much attention to detail was required. These touches are extremely important to whoever's editing these pages.

Remember that this was just before the massacre in Uvalde. It really does seem like they were anticipating the mass murder of kids and wanted to concentrate energies symbolically to help make it happen.

Please check out the video below describing another clear theme from the Sydney paper's issues around this time. It focused on the idea of "small targets". (The sound is dodgy in parts, sorry. But it clears up quite quickly.)

Having seen so much stuff like this over many months I have to conclude there's something vast, centralized and evil going on here.

Posted by MattHaydenAU at 1:26 PM