One thing that really stands out for me is how often you see terms like heartbroken and heartfelt in mainstream media articles and columns these days. It's like the pinky-purple thing. And I believe they are related.

Michelle Obama used the term repeatedly in this opinion piece about the US Supreme Court overturning Roe vs Wade. 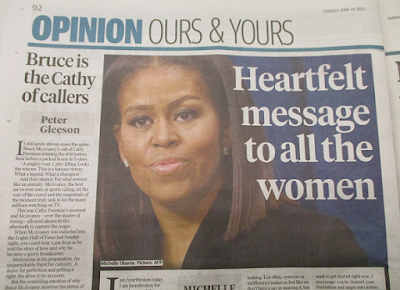 Hopefully you can read this but if not just click on the photo and you'll get a clearer version. You'll see, she repeats the word heartbroken several times. She feigns compassion for chickdom while communicating her rage to her creepy mates about the looming lack of foetus hearts to break. 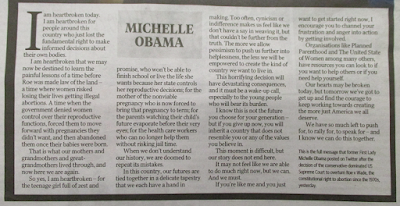 There's another subtextual message here that you can discern if you look at the column in the context of the others on the page. Look at the first photo and you'll see there's one about what a champ Bruce McAvaney is. The writer makes a big deal about his call of the Cathy Freeman Olympic gold medal win.

The headline reads: "Bruce is the Cathy of callers." It's kinda like saying Michelle is a Mike, innit?

That's clearly what they're alluding to. Here's another outlet doing something similar with this photo of Pink, who's also enraged about the SCOTUS ruling. 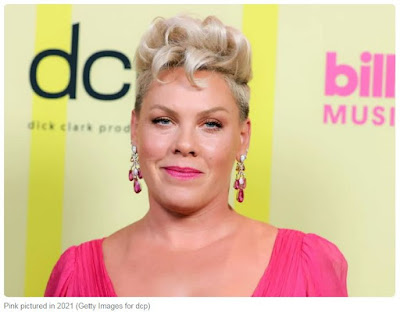 Note the first names behind her head (one is the prefix of Billboard). They're hinting to a select audience that the singer isn't quite as qualified to opine on the matter as she claims. The current woke rule is "no uterus, no opinion", after all.

Both these lie factories have form for mocking "conspiracy theories", including ones about how many famous chicks are actually dudes in reality. Yet they seem to be confirming them with these sneaky comms.

This is another sign that they are hopelessly corrupt, and happy to tell titanic lies day in day out for their criminal owners, the globalist elite.

Posted by MattHaydenAU at 1:42 PM