We all know that the mainstream media journalists of today are not critical thinkers. But their persistent dopiness really does defy belief.

Check out this guy John Flint, who writes for Perth lie factory the Worst Australian. He's lauded as some kinda shit hot investigative reporter. And he's just dropped a "bombshell report" about the dreaded 'rona. I can't read it in full because it's behind a paywall. 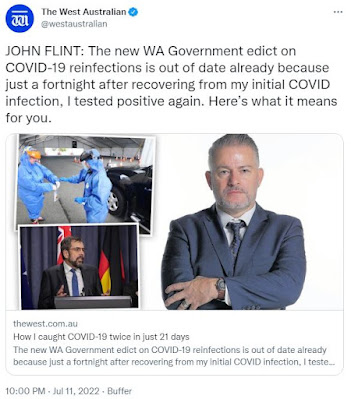 But there is an article on another local fake news outlet that has some details. The podcast hacks quacking on about it are just as clueless as Flinty himself.

Basically he got hit with the 'rona twice in rapid succession so he reckons the public health rules should be tightened even further! FFS.

There's no doubt he's been "vaccinated" because he's been so supportive of all the restrictions. So, if it was the 'rona both times, it proves the shots don't work. So why isn't he complaining about that?

Also, was it actually the 'rona to blame, or just different strains of lurgy? The tests are notoriously unreliable, yet he treats the results as holy writ.

Back in the good old days it was not unusual to get sick a couple of times in a bad flu season, remember.

Actually, I suspect he's fallen ill because his immune system has been compromised by the you know what. But neither he nor his mates talking about his experience in the podcast embedded in the above-linked article have even started to suspect this.

Flinty's big contribution is to say that the public health rules should reflect the lightning speed with which the dreaded 'rona could hit you again. He says that even though the official immunity period after infection is now down to a month it should be made even shorter! 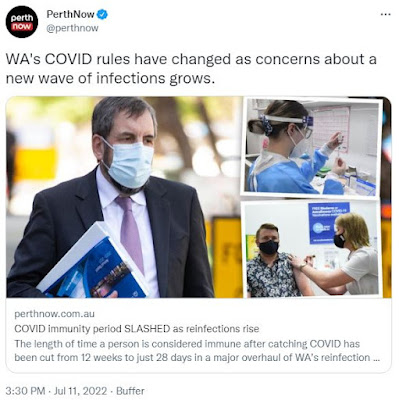 I suppose that in a strange way that's a start. He and his dopey mates at the Worst Australian are slowly realizing that these rules are meaningless. The WA CHO is a complete clown and he's basically pulling all these restrictions and definitions out of his arse.

The real disaster is coming as increasing numbers of severely immunocompromised syringe-stabbed folk get sicker and sicker and more often -- then start to die en masse.

At this point will these idiots start to realize the full horror of what has been perpetrated by globalists using state and federal governments and their public health systems? I hope so but I doubt it.

In any case I saw this coming ages ago. There was a US-based Aussie journo called Nathan Vass who got very sick after a J and J jab and wrote about it in the Failing Terrorgraph (see video below).

The concern I had then has already come to pass, with several people in the Australian media and entertainment industries dying suddenly and mysteriously, including at least one in WA (Russell Woolf).

These people are obviously complete morons but I do feel sorry for them.

Posted by MattHaydenAU at 1:31 PM