Hanging out with the neighbours

There was a very interdasting item in the Failing Terrorgraph on February 12. It was all about the impending death of the Aussie institution Neighbours. The cover photo struck my (illuminati) eye.

The idea that it was described as a factory now on death row seemed strangely sinister. And the shot featured had a strong occult elite vibe because the woman's arm around the dude's head suggested a triangle with the classic one eye under the apex. 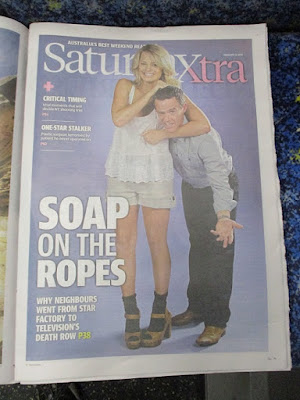 This combined with the headline saying it was "on the ropes" suggested hanging. 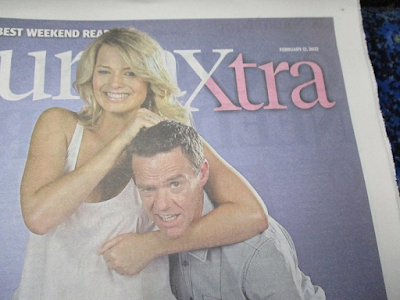 I found it all so intriguing that I actually recorded a video about it, embedded below.

Then there was a page in the June 30 issue that included a similar photo in a piece about the final expiration of the long running soapie. 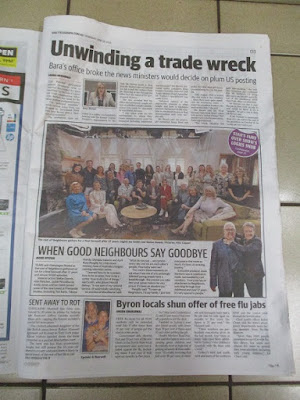 It featured the same dude, though this time he was the one doing the mock throttling. Just below that photo on the other side was a small item about the sentencing of Ghislaine Maxwell, bringing to mind the whole isue of child trafficking.

Note the photo chosen. It had Epstein with his arm around her neck. It also suggested strangling -- particularly when you consider its proximity to the other one on the page. 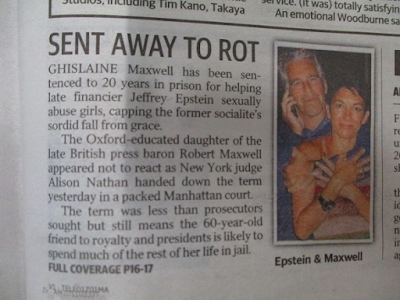 "Sent away to rot" was the title. And if you look at the top of the page, above the Neighbours item, there was an unrelated headline that read: "Unwinding a trade wreck."

If you conclude that the two mock throttling shots below it were some kind of code for "hanging" then the description "unwinding" evoked rope ... Which takes me back to the first image.

It's all very creepy.

It seems that there was some kind of equivalence being made here between Neighbours and what Epstein and Maxwell were up to and that the reason for the show's cancellation over so many years was somehow related to this.

It had to be nixed because it was a "trade wreck". Not sure what the trade was exactly but I'm pretty sure it was not anywhere near as wholesome as the soap itself was.